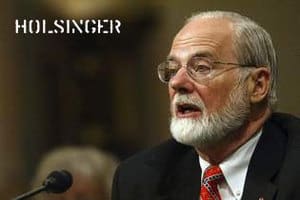 The nominee, whose Senate confirmation hearings in July were marked with concern regarding a 1991 paper the candidate wrote on homosexuality, was sent a questionnaire at the end of July. It has not yet been returned.

Holsinger concluded in his 1991 paper that homosexuality was “intuitively” unnatural. Here’s a bit: “In fact, the logical complementarity of the human sexes has been so recognized in our culture that it has entered our vocabulary in the form of naming various pipe fittings either the male fitting or the female fitting depending upon which one interlocks within the other. When the complementarity of the sexes is breached, injuries and diseases may occur…”

Holsinger said in July that he’s not anti-gay and that the paper was based on “information available to him at the time.”

Some are speculating that the reason for the languishing questionnaire may be that Bush is waiting until the Senate adjourns so he can make a recess appointment, allowing Holsinger to serve until the end of the current Congress late in 2008.

Think Progress reports: “Bush has been more than willing to use this executive power to avoid or delay battles over divisive nominees such as former U.N. ambassador John Bolton and Swift Boat-funder Sam Fox. In June, the Washington Post reported that Bush had filled 105 full-time positions with recess appointments, compared to just 42 such appointments under President Clinton at the same point in his presidency.”