In response to news of plans by Vermont state senator John Campbell to introduce a same-sex marriage bill in the next session of the legislature, the state’s governor Jim Douglas has restated his opposition to such legislation: 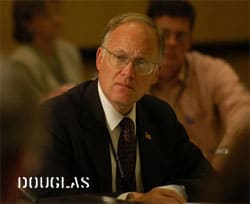 “‘I think the current civil union law is sufficient,’ Douglas said. ‘It accords equality of rights to Vermonters in terms of their relationships and I think we should leave the law as it is.’ Campbell said the bill is unlikely to gain support in the Legislature unless Douglas gives a clear signal he would sign it – or allow it to become law without his signature. But Douglas balked at sending any such signal. ‘I never indicate what I might do when a bill gets to my desk, but I’ve been quite clear that I don’t support the legislation,’ said Douglas, a Republican. He said he wants lawmakers to focus on the fiscal bind brought about by the recent economic downturn.”

Douglas seems to come from the Elton John school of thinking on the topic. Elton recently said gays should be happy with civil partnerships rather than marriage. Elton also recently made his first trip to the state of Vermont.