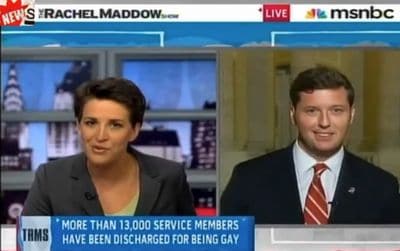 "It's our job now to act with a sense of urgency to make it happen," he said. He told Maddow that he agrees with President Obama's decision not to suspend the policy in advance of Congress sending him a bill to sign, drawing comparisons to President Bush's unilateral decisions.
He reports having support from his colleagues, but does say some representatives of conservative districts will not co-sponsor the bill even if they've privately assured him they'd vote for it.
As for his reasoning in opposing DADT, this Iraq War vet argues:
"When you're in Baghdad in 138-degree heat like I was exactly six years ago, when you're [looking at] the guys to your left and your right or that young women to your left or your right, the fact is you don't care what their sexual orientation is, you don't care what their race is, their religion is, their creed is—you care if they can fire an assault rife, if they can kick down a door, that's what this is about. And that's why we need to repeal this, because now is the time to make it happen."
Video after the jump…