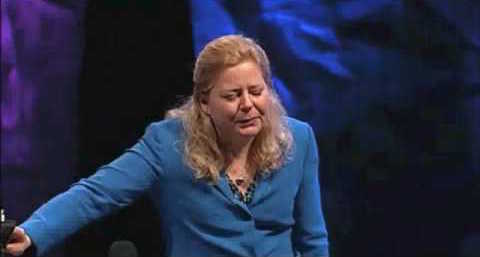 Janet Porter of Faith 2 Action, a far right social conservative activist group, has been suffering no shortage of headaches since her failed attempts to spread the Texas GOP's ex-gay therapy resolution last summer, what with the march of progress and all that, but she is willing to suffer through them without any relief in order to spite Tylenol and their pro-LGBT corporate stance.

Said Porter after seeing the new Tylenol ad that features a lesbian couple:

Their campaign to redefine the family is giving me a headache–but I won’t be taking Tylenol.

We’ve all seen the beautiful Norman Rockwell paintings of a family around the Thanksgiving table. Well now, Tylenol is trying to normalize two lesbians, an ex-husband, and another adult acting as parents. The voiceover says, “Our definition of family is now expanding and blossoming so it’s not this rigid, fixed picture…”

Apparently the ideal of a mom and a dad is too rigid for Tylenol. They want to blossom into some kind of group marriage that reflects the desires of adults instead of what every shred of social science research shows is best for children.

No Tylenol, we’re not swallowing the lie.

And thus are the standard flawed talking points addressed:

You can listen to the crazy below: