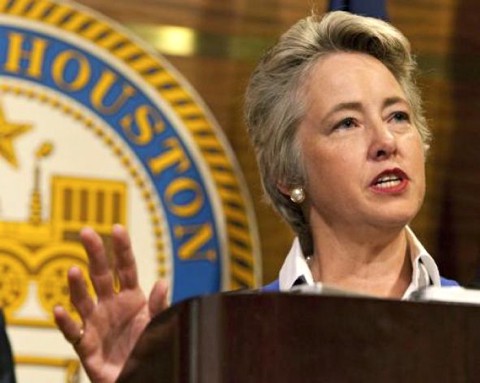 Out lesbian Annise Parker of Houston is the top mayor in the US and the seventh-best in the world, according to the City Mayors Foundation, an international think tank dedicated to urban affairs.

After being selected as one of 26 nominees for the Foundation's semi-annual World Mayor Prize in December, Parker was the only US mayor to crack the top 10. First place went to Calgary's Naheed Nenshi.

“It’s a great honor to be recognized for doing what I love for a city that I dearly love," Parker tells CultureMap in a email. "Being mayor of Houston is the best political job in the world. It provides the opportunity to shape the future of one of the great American cities. I am humbled that others view this work as worthy of being right up there with the accomplishments of my mayoral colleagues around the world.” …

The World Mayor Jury offered its own summary of the thousands of emailed vouchers from Parkers's supporters in the contest:

"Annise Parker should be 2014 World Mayor because of her adept balancing of social and economic issues while making significant progress on both during her three terms as mayor of my hometown, Houston, Texas, USA. Her policies, which enabled the city to remain fiscally healthy during the worst of the recent recession, set the stage for the tremendous economic growth Houston enjoys today. Meanwhile, she champions human rights issues such as by being a pioneer — first openly-gay mayor of a major city — and a role model."

More from the City Mayors Foundation on the selection process for the World Mayors Prize:

An outstanding mayor must possess qualities such as: honesty, leadership and vision, good management abilities, social and economic awareness, ability to provide security and to protect the environment, as well as having the skill to cultivate good relations between communities different cultural, racial and social backgrounds. …

The total number of testimonials received for the 26 nominees exceeded 256,000. While a number of top-ten ranked mayors were supported by thousands of followers, the World Mayor jury considered the size of support as only secondary. The panel was primarily influenced by the arguments and persuasiveness of testimonials bestowed on mayors. As some city leaders in the top ten represent large metropolises, while others are mayors of much smaller towns, members of the jury were of the opinion that basing judgment on numbers alone would unfairly disadvantage mayors from smaller communities.

Read more on Parker's selection and the testimonials in support of her HERE.

While receiving international honors, Parker has come under fire for pro-LGBT initiatives in her third and final two-year term. She's been sued for extending benefits to the same-sex spouses of city employees, and over the City Council's decision to pass an Equal Rights Ordinance containing LGBT protections. Earlier this week, she took the stand in a jury trial over the Equal Rights Ordinance.

Watch a report on the ongoing trial from Click2Houston.com, AFTER THE JUMP…

Previous Post: « Andy Cohen Rips the ‘Beverly Hills Housewives’ for Referring to Their Gay Friends as ‘My Gays’: VIDEO
Next Post: Follow Towleroad on Social Media »