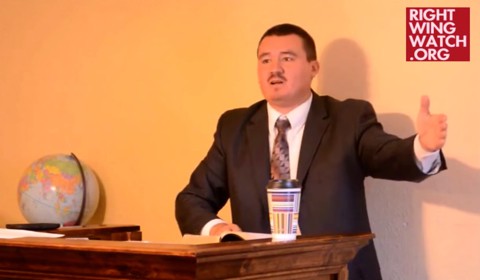 Anti-LGBT hate appears to be on the rise, according to the Southern Poverty Law Center.

The overall number of hate groups of all types dropped 17 percent last year, from 939 to 784. But the number of anti-LGBT hate groups increased 10 percent, from 40 to 44, according to a report in The Texas Observer.

“The rhetoric is becoming much harsher for sure,” Beirich told the Observer. “I think some of the groups are becoming harder-line, whether we’ve listed them or not, because they’re losing on a lot of fronts.”

Stedfast Baptist Church, of Fort Worth, was added based on a sermon by Pastor Donnie Romero (above), a disciple of Arizona Pastor Steven Andersen. Romero called for gays to be put to death in a clip from the sermon posted online by Right Wing Watch in December.

More from the Observer:

Beirich said SPLC maintains a high bar for the hate list. It’s not enough to oppose same-sex marriage or espouse Bible-based views about homosexuality. Rather, groups must use slurs or engage in demonization and propaganda, tactics that make the LGBT community more vulnerable to hate crimes.

“We don’t want to just list everybody in the world,” she said. “We want to point out what is particularly damaging.”

It was another bad year for anti-LGBT groups, as a series of court decisions made same-sex marriage legal in 36 states, up from 18 a year before. At the same time, the Supreme Court was expected to rule on the issue by mid-summer, and most analysts expected the justices to come down on the side of national legalization.

Many of these groups turned their energies abroad, seeking to criminalize homosexuality in other countries after failing in this one. At home, meanwhile, the groups worked to get "religious liberty" laws passed in a dozen states that would allow some businesses to discriminate against certain people if they have religious objections. Although most did not explicitly say so, they were aimed at allowing businesses not to service same-sex weddings. But despite these efforts, only Mississippi saw the proposal actually become law.

The National Organization for Marriage illustrates the dilemma of many of these groups as they lose support in an increasingly uphill battle. The group's 2013 tax returns showed it had fallen $2.5 million into debt after raising only $5.1 million (a 50% drop from 2012), with two donors accounting for half that amount.

Early this year, the American Family Association, listed by the SPLC as an anti-gay hate group, was the prime sponsor of an all-expenses-paid trip to Israel for an estimated 60 members of the Republican National Committee. But the group came under fire by the SPLC and others for its history of extremist remarks, to the point that, two days before the trip, it repudiated its best-known spokesman, Bryan Fischer, and a whole series of his comments. In response to a letter from the AFA, SPLC President Richard Cohen wrote that "it’s difficult to see the AFA's disavowal as anything other than an effort to quell the negative press attention you're receiving in connection with your sponsorship" of the trip for RNC members.