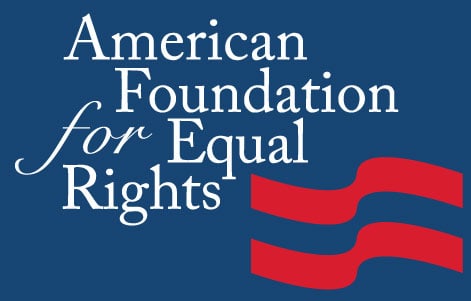 The American Foundation for Equal Rights, the non-profit organization started in 2009 to fight California’s Proposition 8, announced on its Facebook page today that it will be shutting down.

In addition to arguing against California’s ban on same-sex marriage before the Supreme Court, AFER helped bring marriage equality to Virginia last year and was the group behind Matt Baume’s weekly “Marriage News Watch” videos.

Together, we made history.

Nearly six years ago, the American Foundation for Equal Rights (AFER) was created with the specific mission of arguing for marriage equality before the U.S. Supreme Court and to, while doing so, dramatically advance the American conversation on equality.

And we accomplished that … and so much more.

> We returned marriage equality to California—our nation’s most populous state—and, later, to the Commonwealth of Virginia.

> With David Boies and Ted Olson as lead counsel, we smashed the partisan barrier that traditionally divided supporters and opponents of marriage equality. Namely, we brought prominent conservative voices to the debate and proved that marriage is not a partisan issue, but an American issue.

> We put equality on trial. For the first time ever, a federal court heard evidence as to why denying gay and lesbian Americans the right to marry is unconstitutional. And, more importantly, for the first time, we forced our opponents to make their best cases, under oath, as to why marriage bans based on fear and hatred should stand. And we shared that story with the world.

> But, perhaps, most importantly, we drew a line in the sand. We demanded that every American—whether a regular citizen, an editorial board writer, a member of Congress, or a Supreme Court justice—not only listen to the stories of Kris Perry and Sandy Stier, and Paul Katami and Jeff Zarrillo—the brave plaintiffs fighting for justice—but that they also take a side.

The results were extraordinary. We saw Americans nationwide stand up to support equal marriage. We saw it in the opinion pages of our newspapers. We saw senators scrambling to change their public positions. And we saw it from millions of ordinary people who proudly posted the “equal sign” logo of the Human Rights Campaign (HRC) as their Facebook profile pictures, and turned the Internet red.

Today, because of you—and the pioneering work of organizations like the American Civil Liberties Union (ACLU), Freedom to Marry, Gay and Lesbian Advocates and Defenders (GLAD), Lambda Legal, and the National Council for Lesbian Rights (NCLR)—this group of brave plaintiffs and legal teams have finished the work and won every American the right to marry who they love.

But, even as we celebrate this amazing milestone, please remember we’re going to have to work harder than ever before to ensure that lesbian, gay, bisexual, and transgender (LGBT) Americans have full federal equality—nothing more, and nothing less.

The fact is that in 31 states LGBT people have very few clear, consistent legal protections against discrimination. They are still at risk of being fired, denied a job, evicted, bullied, harassed, refused service, or denied access to credit because of their sexual orientation or gender identity.

Last week, leaders in Congress introduced the Equality Act—a comprehensive federal nondiscrimination bill that would guarantee critically needed protections to LGBT Americans, based on their sexual orientation and gender identity, in the workplace, housing, public accommodations, lending practices, education, jury service, and the use of federal funds. With more than 200 cosponsors already, this essential legislation is starting off stronger than any pro-LGBT bill in history.

Led by our co-founder and former chair, Chad Griffin, and the team at theHuman Rights Campaign, this effort is being heralded as the next major fight for the LGBT community by both the Washington Post and the Huffington Post, and it is being backed by major corporate giants like American Airlines, Apple, Dow Chemical, General Mills, Levi Strauss, Microsoft, and Nike.

This is a bipartisan issue that is being backed by a super majority of the American people. Likely voters support workplace nondiscrimination protections by a massive 78% to 16% margin. This includes support from 64% (two-thirds) of Republican voters, and 70% of observant Christians. And David Boies and Ted Olson have spoken out about the critical importance of this effort.

So, while AFER may be closing its doors, we are dedicating all remaining resources to the ongoing battle for full equality. It’s going to take all of us to reach the finish line, and we hope you will continue on this journey with Chad and HRC as we turn our sights to securing comprehensive LGBT nondiscrimination protections in this country and to ensuring lasting equality around the globe. (www.hrc.org)

There is much more history to be made. And we hope you will continue on this journey with us.

Previous Post: « Married in the Morning, Fired in the Afternoon: The State of LGBT Anti-Discrimination Laws in the U.S.
Next Post: News: Gambit, Clean Power, Ted Cruz, Kraft, Koch Brothers »