The gender-bending NYC house-music and drag artist Kevin Aviance tore up nineties dance floors with fierce tracks like “Din Da Da” and “Cunty,” then was the victim of a brutal 2006 gaybashing (in which the attackers all pled guilty). 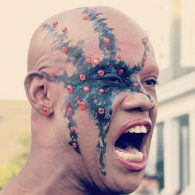 But these days, after several tough post-bashing years of therapy and healing, Aviance is back in the studio under his Samuri label with DJ Uri Dalal, having just put out this video for the activist group Gays Against Guns that calls out all U.S. Senators facing reelection next week who’ve taken money from the National Rifle Association in return for blocking laws that could play a role in preventing mass shootings like the June 12 massacre at Orlando’s Pulse LGBTQ nightclub.

Towleroad caught up with the always-fierce-and-fabulous Aviance…

So what led to you doing “Puppets of the NRA,” the track for Gays Against Guns?

The group reached out to me saying that they wanted my aesthetic for something positive. There’s a lot of gun violence in this country right now, and I know personally how one can be in the wrong place at the wrong time. People are crazy in this country right now. That could have been me at the club in Orlando doing a gig. I feel for all the families of those who were lost that night. The gays can change things! We can move this mountain.

How has your life been in the decade since the gay bashing?

My mom died around that same time, so it was really rough for me. I had to relearn how to do things again, to find my head. They took something from me when they did that. I was such a free spirit before and I had to learn to be a free spirit again, but it took me five to six years and a lot of therapy to pull myself back together.

And how are you doing now?

I feel great. I’m living in Washington Heights and I have  a production company called Samuri with DJ Uri Dalal and we’re producing our own songs plus others’ songs and we’re having a great time doing it.

You guys just signed a contract with the legendary house label Nervous Records?

Yes, we did a song called “Bang the Beat,” will be coming out in February.

And what else is going on with your life?

Hopefully I’ll have a one-night cabaret show about my life up soon called “The Lost Sessions.” It’s about stuff you don’t know about me, where I’m from. I do some jazz dancing and gospel and a hodge-podge of different songs.

What else are you living for these days?

Which of your own tracks is your favorite?

They all stick out to me. Performing-wise, “Din Da Da” really comes from my body–it’s really magical for me to do it without any music, just the rhythms form my body. I clap it, I slap it, I yell it, I scream it, I dance it!

Previous Post: « ‘Trainspotting’ is Back After 20 Years with T2 Sequel: TRAILER
Next Post: Ryan Reynolds and Conan O’Brien Enjoy Wet, Sloppy Kiss in ‘The Notebook 2’ – WATCH »