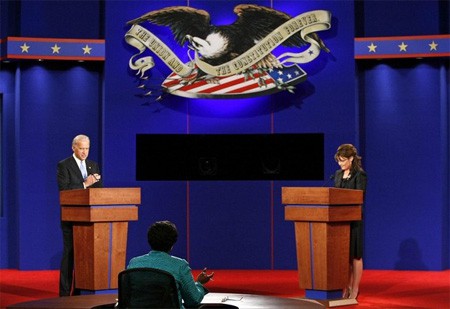 Vice-presidential candidates Senator Joe Biden and Governor Sarah Palin exchanged opinions in the only debate they’ll have at Washington University in St. Louis tonight. Here are some initial notes. I’ll be adding to this.

W in a skirt: Here’s a side-by-side comparison of Bush in 2000 and Palin last night.

Biden on Dick Cheney: “Vice President Cheney has been the most dangerous vice president we’ve had probably in American history. The idea he doesn’t realize that Article I of the Constitution defines the role of the vice president of the United States, that’s the Executive Branch…The only authority the vice president has from the legislative standpoint is the vote, only when there is a tie vote. He has no authority relative to the Congress. The idea he’s part of the Legislative Branch is a bizarre notion invented by Cheney to aggrandize the power of a unitary executive and look where it has gotten us. It has been very dangerous.”

Strange moment where Palin refuses to answer a question on campaign promises.

Biden: McCain ‘out of touch’ on economy.

Palin’s biggest lie of the night, and her Katie Couric moment.

Two of Biden’s best moments, on the difference between Obama’s and McCain’s policies on everything, and on his Achilles heel:

Former Secretary of State Madeleine Albright: “Americans could not help but conclude that any president would be stronger and more confident with Joe Biden by his side.”

WSJ Washington Wire: “A confident, folksy Sarah Palin attacked the Democratic presidential ticket on taxes and partisanship, holding her own against her senior vice-presidential rival. Joe Biden, assiduously avoiding any direct attacks on his opponent, kept his focus trained on the top of the ticket, charging again and again that Palin’s partner, John McCain, wants to give tax breaks to the rich and deregulate the economy.”

L.A. Times Noam Levey: “Sarah Palin may have helped herself in debate, but not McCain.”

Marc Ambinder: “Averaging expectations, style and points, it was a wash. Partisans have reason to be satisfied; I honestly have no idea how undecided voters will react. But the topline here is that, when it comes to worrying about Palin, the McCain campaign can now exhale …”

Andrew Sullivan: “She doesn’t have it. Maybe one day she might. But not now. Biden’s peroration was very, very strong. There is no contest here.”

WaPo‘s Eugene Robinson: “The pattern, so far, has been one of Biden presenting facts and Palin countering with… saying stuff.”

Do Americans want a vice president who winks at them?

Rachel Maddow and Pat Buchanan discuss the debate’s ultimate impact, AFTER THE JUMP…