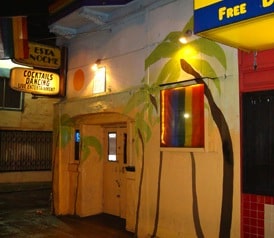 KTVU in Oakland reports that Esta Noche, a Latino gay bar in San Francisco, was vandalized early Friday morning, its facade sprayed with several swastikas. The authorities kind is considered to be a serious hate crime, but upon discovering the Nazi symbols, the manager of the bar not only refused to call police but painted over them before a local news crew could arrive on time to capture them on film.

The manager, Edgar Lopez, explains why he didn't file a report: “It's a lot of problems with police. They have many paperwork and everything."

Esta Noche's co-owner believes that the bar may have been targeted “because the place is gay.” He also says that he would call police if the bar is ever vandalized again.