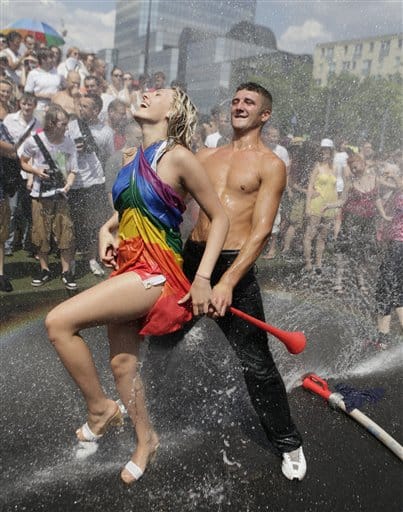 EuroPride was held outside of Western Europe for the first time and organizers chose Warsaw as its host city. As you know, very Catholic Poland is not known for it's tolerant or accepting attitude towards the LGBT community.

According to the AFP, "opinion surveys show that 80 percent of Poles oppose gay marriage and 93 percent believe gay and lesbian couples should not have the right to adopt children. Two out of three Poles oppose gay demonstrations."

The AP reports on the parade:

The parade, part of the EuroPride gay rights festival, is meant to give a boost to the fledgling gay rights movement in Poland. Gay rights were strongly repressed during the communist era, and gays and lesbians have struggled since communism fell 20 years ago for acceptance in a society still strongly influenced by the church. "We feel like they are 20 years behind the Netherlands," said Ad Bakker, a 39-year-old from Holland who traveled to Warsaw to show solidarity with Polish friends. "But the atmosphere is good and we hope that EuroPride will help." A Polish friend of his, Sebastian Blaszczyk, 36, said the situation in Poland "gets better and better every year," but the country still has far to go in accepting gays.

There were, of course, protesters.

"As the activists moved slowly through the city, they passed small, scattered groups of counter-protesters who jeered and heckled them. Police said they arrested eight people — some of whom threw eggs and one of whom attacked a police officer — for trying to disturb the march."

The event drew about 8,000 people. A couple of video clips of the march AFTER THE JUMP.