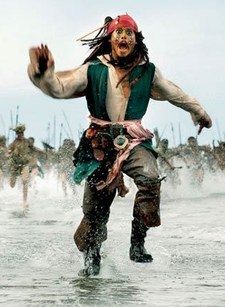 Rarely are the gay-related culture wars a laughing matter.

The amount of vitriol and spite lobbed in our direction can be frightful, distressing and all around depressing. Sometimes, however, socially conservative arguments against equality cross the line from worrisome to absurd, and actually give us a way to knock down their arguments.

Consider a rambling argument made by Robert Broadus, head of Protect Marriage Maryland, at a hearing on a proposed same-sex marriage bill.

If you pass this bill, you will set the groundwork that one day, when artificial intelligence is that advanced, we’ll be considering whether or not people can marry their Androids.

If anyone has watched Star Trek, and you’ve seen the character Data, he was able to generate a tear, because he could feel emotion. If you knock down marriage between a man and a woman now, if you say any two people who love each other can get married, then you set that precedent.

The crowd couldn’t suppress their giggles, of course.

Watch and read all about it, AFTER THE JUMP…

Or then there’s a letter from Virginia Republican official Eugene Delgaudio, the man who claimed gay TSA agents would grope male passengers, in which he warns of a gay “invasion” at the Gasparilla Pirate Fest in Tampa, Florida:

Word is that Radical Homosexuals have infiltrated as event organizers to promote homosexual events that are designed to prey upon unsuspecting college students by enticing them to join their “krewes” and help build parade floats in exchange for free alcohol.

When the young men are sufficiently intoxicated, homosexuals dressed as pirates whisk them away to God knows where to take advantage of them sexually.

And these are only two of the more recent ridiculous arguments against LGBT people.

We have in the past been called demons, Bolivian president Evo Morales once said chicken consumption causes homosexuality, and one right winger named Herb Grossman claims something called “false evolution” played a “supernatural” trick on humanity by casting the gays into the world.

It’s all absurd, of course, and guarantees a great laugh. But these assertions also provide us with plenty of material for counter-attacks.

I’ve argued before that ridicule and satire can be effective routes to taking down an ideological nemesis. As British Think Tank Demos noted in their study, A Radical Approach to Extremism, “Satire has long been recognized as a powerful tool to undermine the popularity of social movements: both the Ku Klux Klan and the British Fascist party in the 1930s were seriously harmed by sustained satire.”

While surely we must continue our legislative and social actions, a little comedy never hurt anyone, and taking some light-hearted pokes at our opponents could may just help laugh them out of town.

To help get the ball rolling, here’s video of Broadus’ Android speech, via Good As You: