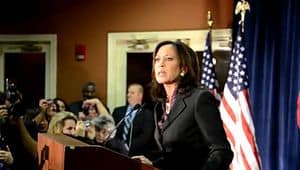 In [the brief], she argued that only public officials exercising the executive power of government have authority to represent the state when laws passed by voters or the Legislature are challenged.

“California law affords an initiative’s proponents no right to defend the validity of a successful initiative measure based only on their role in launching an initiative process,” Harris wrote.

Harris contended in her brief that rather than empowering citizens, granting the sponsors of initiatives the ability to overrule the governor and attorney general’s judgment “would rob the electors of power by taking the executive power from elected officials and placing it instead in the hands of a few highly motivated but politically unaccountable individuals.”

In January, the 9th Circuit Court of Appeals deferred the question of standing for Prop 8 proponents back to the California Supreme Court. A hearing is expected before the end of the year.