More reactions are pouring in from celebrities and others in the wake of Tracy Morgan’s homophobic rant. Yesterday, CNN’s Roland Martin defended Morgan in a blog post claiming that Morgan’s comedy routine was just that – a routine. 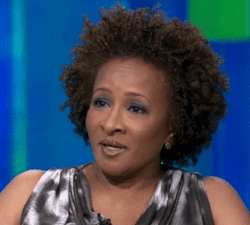 But think for a moment at all the times you’ve laughed at comedians based on the things they had to say. Then ask yourself: Did I laugh, and why?

Sorry, if I’m being honest here and not focusing on political correctness. I just believe that many of you would be shocked and amazed that you laughed hysterically at some of the most sexist, homophobic, racist stuff imaginable by comedians of all shapes, sizes, ethnic backgrounds, genders and sexual orientations.

Wanda Sykes condemned both Morgan and Martin for foolishly coming to his defense.

I fault the TN lawmakers. They’ve created an anti-gay environment. Don’t believe Tracy would be so ignorant in LA. I do believe in free speech, but for a youth in TN or any other numerous place, Tracy just yelled, ‘Fire,’ in a crowded theater.

Ro, I love and respect you, so I feel that I can tell you that your column is some bullshit. We can do better. Tracy has the right to say whatever he wants to say, just like we have the right to say, not acceptable. and WE as a country. We used to picnic to watch public hangings, but WE figured out, that was some sick shit.

While it is certainly a good thing that Morgan has started to take responsibility for the offensive content of his routine by apologizing publicly to his fans and the gay community, he must do more to balance the harm that his words have inflicted. He could take one profound step to show his sincerity by meeting with parents and young people who have been personally effected by anti-gay violence or family rejection. GLAAD has reached out to Tracy Morgan’s publicist and offered to facilitate such a meeting. We implore him to take us up on this.