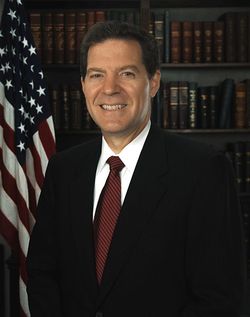 Once upon a time, Kansas's new governor, Sam Brownback, wanted to lead the free world. He hated gays and their "marriages," he was dog-tired of America's long moral decline, and most importantly, he was on a first-name basis with the Supreme Creator of The Universe. God, as Sam called him, really wanted Sam to be the President of The United States of America. And so, in 2008, then-Senator Brownback ran for that office on a platform of All Jesus, All The Time.

But Sam was wrong about God's plans for him, and now the governor's ambitions are more modest. Mostly, it seems, he just wants high schoolers to stop making fun of him. This week, Gawker reports on Kansas high school senior Emma Sullivan, who visited Topeka on a field trip to see the governor speak. After her visit, Emma Tweeted of her time with the anti-gay, anti-Palestinian, anti-evolution, anti-stem-cell-research governor:

just made mean comments at gov brownback and told him he sucked, in person #heblowsalot

Apparently, Emma Sullivan didn't actually tell Gov. Brownback that he "sucked, in person." Still, she thinks he sucks. So — how did Gov. Brownback respond to this teenager's assault on his non-sucktitude?

His staff contacted her school's principal. Now, Emma's got to write a letter to the governor apologizing for voicing her opinions.