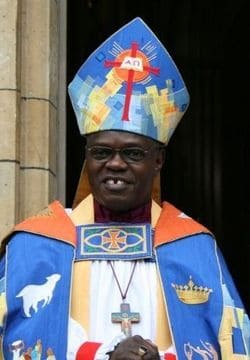 England's second most senior cleric, the Archbishop of York Dr. John Sentamu, has declared his opposition to same-sex marriage. No surprise there. What's surprising is the polite way in which Dr. Semantu expresses his concern. From the Beeb:

Dr Sentamu pointed out that bishops in the House of Lords did not seek to obstruct the introduction of civil partnerships between same-sex couples in 2004.

"We supported civil partnerships because we believe that friendships are good for everybody."

He said the Church also had no opposition to plans to allow civil partnership ceremonies to take place in places of worship, if agreed by the religious denomination in question.

… He said: "If you genuinely would like the registration of civil partnerships to happen in a more general way, most people will say they can see the drift. But if you begin to call those marriage, you're trying to change the English language.

"That does not mean you diminish, condemn, criticise, patronise any same-sex relationships because that is not what the debate is about," added Dr Sentamu.

So the opposition's about language. And religious freedom. Which isn't to say Dr. Sentamu doesn't feel passionate about it. According to the Telegraph, the Archbishop …

… says the Government would face a rebellion on any changes in [marriage] legislation. His intervention may serve as a rallying cry for traditionalist Tories who oppose Mr Cameron’s plan.

“The rebellion is going to come not only from the bishops,” he says. “You’re going to get it from across the benches and in the Commons."

… “Marriage is a relationship between a man and a woman,” says Dr Sentamu. “I don’t think it is the role of the state to define what marriage is. It is set in tradition and history and you can’t just [change it] overnight, no matter how powerful you are.

Unless, perhaps, you're King Henry VIII?