On Saturday, I had the distinct honor of attending the Los Angeles premiere of Dustin Lance Black's play, '8' for Towleroad. From the balcony of a packed Wilshire Ebell theatre, I could see why the American Foundation for Equal Rights (AFER) and Broadway Impact felt so strongly about this production: it brought together more than 200,000 people, raised $2 million, and showed the world why marriage recognition is not just a matter of time. It is a matter of law. 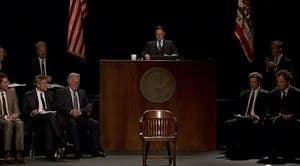 It was a satisfying experience from a personal perspective, as well – I'm not ashamed to admit that I got my fanboy on with the incomparable Yeardley Smith (her glamorous dress was certainly not from Lamps Plus), the gorgeous Matt Bomer, who said I had a "hot dork" vibe (blush!), and the gracious Lt. Gov. Gavin Newsom.

But, "8" was more than just a sparkling gathering of the Hollywood glitterati; it was a powerful statement of the most effective legal argument for marriage recognition for gay persons: love, family, and community.

Regular Towleroad readers may recall that I have argued that couching our quest for marriage recognition solely in the language of "rights" or "freedom" or "equality" is incomplete and unhelpful. It's not that we aren't seeking certain rights and freedoms, but that's only part of the story. We seek to express our love through state recognition, to join the community of persons who raise children in wedlock, and benefit those children, our communities, and our nation by removing a burden on certain families that are no different than others. The LA version of "8," which Mr. Black slightly edited after the New York premiere, captured this message of love, honor, and family (an essentially conservative message) and reflected the power Ted Olson's, David Boies's, and AFER's arguments at trial.

Most of the play came directly from transcripts of the trial before Judge Vaughn Walker, and because the tapes of that trial will not be released, "8" is the only lifeline we have to Perry's drama, heart-breaking tragedy, and triumphant victory. Mr. Black and Director Rob Reiner interspersed the "Yes on 8 " commercials which attempted to scare viewers in order to obscure the real issue of marriage recognition. Mr. Reiner also directed perfectly, especially, Jane Lynch and John C. Reilly as the hate-filled Maggie Gallagher and the bumbling Dr. Blankenhorn, respectively, bringing out Ms. Gallagher's moral bankruptcy and Mr. Blankenhorn's scientific numbskullery. 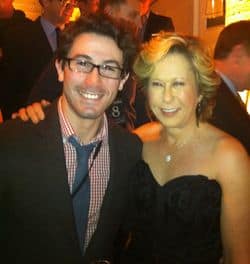 Mr. Reilly was particularly impressive, stumbling and stewing in his seat, arguing with George Clooney and begging Brad Pitt for "just one sentence, please, just one sentence" to answer a question. Martin Sheen took on Mr. Olson with such gusto, evoking the Josiah Bartlett running for President in "The West Wing," that the audience roused with an extended applause. And, Jane Lynch was almost too brilliant as Ms. Gallagher; Ms. Lynch's comedic timing made Gallagher appear foolish, a caricature, fodder for ridicule. Ms. Gallagher is also that, but her words are too vile to be taken so lightly.

That a good trial makes for good drama is not surprising; Dick Wolf has made a career out of that fact. But, Mssrs. Black and Reiner took a good drama and made it good politics and law by emphasizing the human and family values of the quest for marriage recognition.

As the plaintiffs Kristin Perry and Sandra Stier, respectively, Christine Lahti and Jamie Lee Curtis joked about how their sons do not like to be seen in public with their moms and they did their best to leave trial to get home in time for soccer practice. Should they get pizza? Would Spencer Perry have enough time to study for his test? How was Elliot Perry going to get to soccer practice? Ms. Lahti almost cried when she expressed her undying love for her son, and Ms. Curtis wanted nothing more than to live a normal life. Theirs was a family making sacrifices that no family should have to make, and even their teenage boy could see it. Elliot Perry (played by Jansen Panettiere) "hated that we have to do this" not because he was missing soccer, but because no one should have to justify the legitimacy of the family. 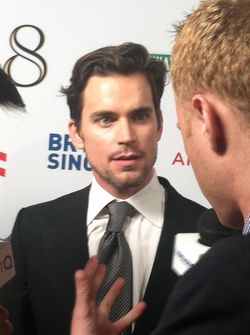 Mr. Panettiere was reminding us that the fight for marriage recognition is about Elliot and Spencer ("Spence"), the loving family in which they are being raised, and the thousands of families like theirs. It is essentially a conservative quest: to bring the stabilizing and legitimizing force of state-sanctioned marriage to the gay community. While Martin Sheen turned red-faced delivering Ted Olson's rousing closing argument about due process rights and the liberty of intimate decision-making, and George Clooney's David Boies dissected the baffling Blankenhorn, and Chris Colfer told a powerful story of antigay hatred, it was the snippets of family — Sandra affectionately comforting Kristin, Paul Katami (Matthew Morrison) taking Jeff Zarrillo (Matt Bomer) by the hand, Kristin crying about what the trial is doing to her son, and Paul getting misty-eyed that anyone could consider him (the "cool uncle") a danger to anyone — that really struck home.

This was the singular achievement of "8": Looking for great drama, and a few laughs, Mr. Black and Mr. Reiner found good law. Bans on marriage recognition are unconstitutional because they burden families and interfere with the most personal of personal obligations. States have no reason to ban gays from the institution of marriage because doing so actually harms the state by making it harder to raise children. And, demeaning the love of one class of persons can never serve any legitimate state interests. That story cannot fully be told in the language of rights and equality. Mr. Black and Mr. Reiner stumbled upon the same conclusion by creating a play that made the "right" to marry about love, honor, and family.

I encourage everyone to watch the full production, which Andy posted yesterday. I also have a few more pictures of those stars who so generously took a moment to talk to me posted @ariezrawaldman on Twitter.