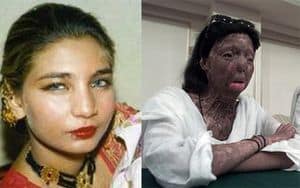 She couldn't make it. She'd been a teenage dancer, working the red light district in Karachi, Pakistan, when she met her husband. He was in his mid-30s, and his name was Bilal Khar: the rich and powerful son of a governor. The pair were married.

Things didn't go well. He beat her, she said, and she left him. Afterward, as Fakhra Younis slept on her mother's couch a few feet from her five-year-old son, Khar stole into the house and poured acid on her face and body.

He was acquitted of the crime; she could not escape her new face. Despite a move to Rome and more than three dozen reconstructive surgeries over the last decade, she was destroyed. She jumped to her death from a height of six stories on March 17th.

Tehmina Durrani, Ghulam Mustafa Khar's ex-wife and [Bilal Khar's] stepmother, became an advocate for Younus after the attack, drawing international attention to the case. She said that Younus' injuries were the worst she had ever seen on an acid attack victim.

"So many times we thought she would die in the night because her nose was melted and she couldn't breathe,'' said Durrani, who wrote a book about her own allegedly abusive relationship with the elder Khar. "We used to put a straw in the little bit of her mouth that was left because the rest was all melted together.''

"Her life was a parched stretch of hard rock on which nothing bloomed,'' Durrani wrote in a column in The News after Younus' suicide.

Younus' ex-husband grew up in starkly different circumstances, amid the wealth and power of the country's feudal elite, and counts Pakistani Foreign Minister Hina Rabbani Khar as a cousin.

Bilal Khar once again denied carrying out the acid attack in a TV interview following her suicide, suggesting a different man with the same name committed the crime. He claimed Younus killed herself because she didn't have enough money, not because of her horrific injuries, and criticized the media for hounding him about the issue.

"You people should be a little considerate,'' said Khar. "I have three daughters and when they go to school people tease them.''