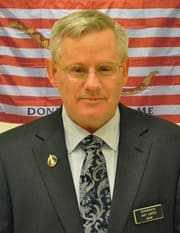 The New Hampshire House will vote on HB 437 this week; an ugly little piece of legislation which could repeal the state's 2009 marriage equality law. As Andy reported Wednesday, the House will also vote on something known as the "Bates House Amendment," which will put the following question on the November ballot:

Shall New Hampshire law allow civil unions for same-sex couples and define marriage as the union of one man and one woman?

Note how, at a glance, the question appears to be pro-gay rights. It's tricksy that way precisely because Rep. David Bates, the Wyndham Republican who spoke grandly last week about the importance of New Hampshirites having their say, knows that heavy majorities in his state don't want to roll back extant marriage equality laws.

Well — HB 437 has at least one staunch ally in the New Hampshire State legislature who feels no need for that kind of lingual pussyfooting. That's Rep. Gary Hopper, a Republican from Weare. He's taken to his Facebook page to explain the importance of HB 437, and here's what he says:

HB437 The Repeal of Same Sex Marriage is going to be voted on this week.

I will be voting for it.

NH Constitution Part First “[Art.] 6. [Morality and Piety.] As morality and piety, rightly grounded on high principles, will give the best and greatest security to government, and will lay, in the hearts of men, the strongest obligations to due subjection;”

Piety (reverence for God and Family)

The idea is simple, if people are self regulated by their own moral compass less government is needed to keep the peace.

Traditional marriage has provided the best environment to raise children but it was severely diminished in the 1970s by no-fault divorce.
That change made the focus of marriage on the individual and not the family. Since that change teen suicides have gone up 10x, the social cost has been mind boggling. In fact over 90% of the children in the care of the Department of Child Youth Services are from single parent or broken homes not to mention how many young people who have ended up in prison as a result.

The traditional family is the best place to raise children and any further erosion of that standard only destroys our country more and increases the size and scope of government.

"If we want less government, we must have stronger families, for government steps in by necessity when families have failed."
— Jimmy Carter. GOVERNMENT PRINTING OFFICE, ASTATEMENT IN NEW HAMPSHIRE, AUG.3, 1976in I THE PRESIDENTIAL CAMPAIGN

That's what New Hampshirites are up against. It doesn't for a moment occur to Hopper that the "morality and piety" mentioned in the NH Constitution might mean something very different to (say) a Unitarian than it does to him. And he doesn't understand that his own words —

— undermine both his own position and New Hampshire's famously individualist spirit. "Self-regulated," "their own moral compass" — gays have selves, too, and moral compasses. Hopper doesn't know this. Someone should tell him.

The paper he cites as evidence of his position, by the way, isn't about marriage equality. It's a Heritage Foundation paper from the year 2000, discussing the evils of no-fault divorce. In general, its message seems to be that more marriage is good, less marriage is bad. Noted.