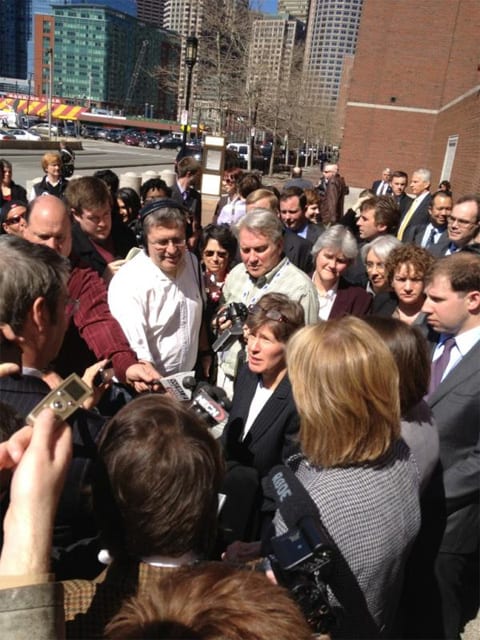 Historic arguments were made in the challenge to the Defense of Marriage Act today as the 1st Circuit Court of Appeals in Boston became the first federal appeals court to consider the constitutionality of DOMA.

Watch the press conference held by GLAD following the hearing, AFTER THE JUMP…

GLAD has some photos from outside the proceedings at its Facebook page. 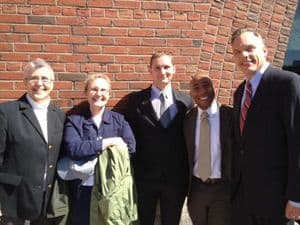 Lawyers squared off over the constitutionality of DOMA, amid discussion about whether the law fails a rational basis standard of scrutiny or interferes with a state’s rights under the Tenth Amendment. Stuart Delery, who’s gay and the Justice Department’s acting assistant attorney general for the civil division, surprised many when he said the Obama administration wouldn’t defend DOMA on any basis, including under rational basis review.

Last year, the Obama administration said it would no longer defend DOMA in court, on the basis that President Obama had determined that the anti-gay law fails heightened scrutiny because it discriminates against gay couples. Asked by Judge Juan Torruella whether the administration has a position on the rational basis test for the law, Delery replied, “We don’t.”

MetroWeekly's Chris Geidner reports that "the four lawyers arguing the two cases to three judges appeared to be operating from different worlds" and that "one of the only points of complete agreement was that DOMA was an unprecedented attempt by Congress to define marriage across all federal laws."

Delery, representing the federal defendants in the two cases, Gill v. Office of Personnel Management and Massachusetts v. United States, was in the unusual position of agreeing with the plaintiffs on most points because of President Obama's February 2011 decision that Section 3 of DOMA is unconstitutional because such laws should be subjected to heightened scrutiny and that, accordingly, DOJ would stop defending DOMA in court.

The head of Department of Justice's Civil Division, Delery told Chief Judge Sandra Lynch and Judges Juan Torruella and Michael Boudin today that Congress's intent to single out gay and lesbian couples for discrimination was clear from the name of the bill itself: "It's a defense against something, and that defense was [against] same-sex couples."

Geidner also notes some of Paul Clement's argument for the House Republicans in defense of the law:

When Judge Torruella asked Clement if it was relevant that DOMA was, as Clement had put it, the "first comprehensive attempt" at such a definition, Clement said no — pointing to the fact that, in his view, DOMA was "not in any way an effort to override states."

He even acknowledged at one point, "The federal government isn't in the business of having its own marriage certificates."

Although the debate over the level of scrutiny to be applied to sexual orientation classifications was front and center today, Clement also made an argument that a prior case heard by the First Circuit regarding the constitutionality of "Don't Ask, Don't Tell" — Cook v. Gates — foreclosed the question by concluding that rational basis should apply.

Much more at MetroWeekly and the Washington Blade.

Watch the press conference held by GLAD following the hearing, AFTER THE JUMP…

Previous Post: « Your Augmented Future: VIDEO
Next Post: To My Unborn Child, If You’re a ‘Fag’, I’ll Kill You: VIDEO »