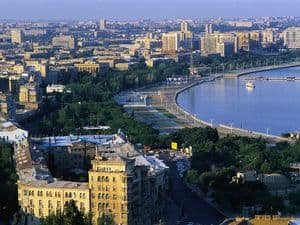 In May, the 2012 Eurovision Song Contest shall be held in Baku, the capital of Azerbaijan: a one-time Soviet state which is now a nominally secular democracy, bordered to the south by Iran and inhabited primarily by Shi'ite Muslims. In January, the gay website nighttours.com briefly toyed with the idea of a gay pride parade on the contest's eve. The Azerbaijani media was deeply worried, and various important people in Baku quickly assured reporters that the parade was just a rumor. Even gay Azerbaijanis like Rusian Balukhin, who runs gay.az, thought the parade was a terrible idea:

“To take on the organisation [of a parade] you would need guarantees of your safety,” he told IWPR. “Basically, among Baku’s gays and lesbians there is no one even dreaming of demonstrations or parades.”

But such denials are insufficient for the radical clerics in neighboring Iran, whose radical clerics' delicate sensibilities can't countenance even the false rumor of a pride parade in a nearby country. Hossein Alizadeh, of the International Gay and Lesbian Human Rights Commission, released a statement yesterday explaining the situation:

… The possible gay parade in Azerbaijan is particularly troubling for the religious establishment in Iran, given the fact that over 85% of the Azeri population follow Shiite Islam, making Azerbaijan -along with Bahrain, Iran and Iraq- one of the few countries with Shiite majority … the Ayatollahs in Iran see the possible gay parade in a neighboring Shiite country as a declaration of cultural war against all Shiites. A combination of religious bonds, historic ties — Azerbaijan was part of Iran till early 18th century, when Tehran lost the territory to an expanding Russian empire — and linguistic commonality — one third of Iranians speak Azeri — has sparked a national anxiety over the imminent gay parade in Baku.

The latest wave of official statements against the gay parade came on Friday, during the Friday Prayers Service in Tabriz, the historical seat of Azeri culture and the center of Iran's Azeri population. During today's service, the prominent Shiite clergyman and a personal representative of Iran's Supreme Leader, Ayatollah Mohsen Mojtahed Shabestari accused the government of Azerbaijan of Islamophobia, "which is demonstrated in their policies such as the ban of headscarf for women, and imposing limits on religious missionary work." Ayatollah Shabestari claimed that Eurovision pursues an anti-Islamic agenda: "the situation in Azerbijan is so bad that the rulers are wasting public funds to throw a party that is requested by anti-Islamic forces… more outrageously is the gay parade that they are planning to organize…this dance party and the parade [attract] all sorts of anti-Islamic groups and perverts… While many countries do not allow perverts and fags to hold a rally, the rulers of dominantly Shiite Azerbaijan have allowed for this unethical event to take place… I want to ask them 'what has happened to your Islamic honor and why have you turned into play toys in the hands of Zionists?'" The Friday Imam ended his comments by publicly denouncing the leadership of the Republic of Azerbaijan, cursing the organizing of the parade, and "warning the Baku government to cancel the gay parade or else expect widespread demonstration and public anger in the next few days." (http://www.farsnews.com/newstext.php?nn=13910208000528)

Earlier, the radical Ansar-Hizbullah group in Tabriz sent and open letter to the Presidents of Iran and Azerbaijan, blaming the gay parade on Israel and threatening to capture the Azerbaijan's mission in Tabriz if the parade ever takes place ( http://ansar-tabriz.blogfa.com/post-123.aspx ) Media reports also indicates conservative groups in Azerbaijan are equally unhappy about the possible gay parade in their country (http://iwpr.net/report-news/gay-parade-controversy-azerbaijan). In recent days, Iranian media have reported extensively on the negative sentiments in Azerbaijan against the gay parade (http://www.arannews.ir/fa/news/29917.aspx)

Of course, the radical clerics are correct. The Eurovision Song Contest, and the cosmopolitanism it represents, really is a threat to the small and circumscribed worlds of extremist religion. That's why people like it.