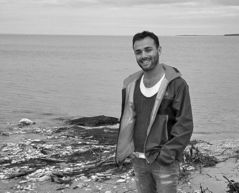 Yesterday, the Winnipeg Free Press published the harrowing story of Hamed, a 27-year-old gay man whose 17-month flight from persecution in Iran has finally concluded in Canada:

Growing up in a country where homosexuality is so taboo it's not even discussed, was difficult. As a child, he says he knew he was different but didn't know what it was or what was "wrong" with him.

"And I can't find anybody else like me. I was 20 before I found another gay person," he said. When he knew what he was, it wasn't much of a relief.

"I can't be myself," he said. "I had to tell all those lies. I must hide myself. I'm alone all the time. I'm scared (of) my problem and running from myself."

Hamed was in a relationship with another man for five years in Iran before his partner's family discovered their romance. The family was appalled, as Iranian families are wont to be, and threatened to tell Hamed's family. The news could have led to anything — disownment, imprisonment, execution — and so Hamed fled to Tehran. But friends told him he still wasn't safe. They suggested he go to Turkey.

He couldn't get work there, but he could apply for refugee status. And he would be safer. So he went. While waiting on a more permanent arrangement, Hamed boarded with another gay man and a trans couple. None of them had work-permits, and they were forced into low-paying and dangerous under-the-table jobs. They were terribly poor. One of Hamed's roommates lost his savings when he broke his leg on a job — he was forced to pay both his hospital bills and a fine for working without proper documentation.

From the Fress Press:

"They're in limbo," says Arsham Parsi, executive director of the Iranian Railroad for Queer Refugees, based in Toronto. For privately sponsored refugees, the processing time can be up to two years before they get to Canada, said the founder of the organization that started in 2008.

"They don't have any means and are at risk of being deported," said Parsi. The railroad helps an average of five or six new Iranian refugees a month who are in such limbo.

Hamed was one of them. During his time in Turkey, Hamed was in frequent Skype contact with the men who became his sponsors in Canada. Now he's in their care, looking for work, and mastering English — his second language in a year and a half:

Hamed said he'll attend special classes at the University of Manitoba in the fall to improve his English to a Benchmark 8, the level required to attend post-secondary programs. Right now, he's reading at Level 4 and speaking and listening at Level 5.

In Turkey, he practised his English with an online tutorial. In Winnipeg this spring, he passed the written test in English to get his driving learner's permit. In June, Hamed is to take his road test, and hopes that will look good on his resumé.

This summer, his sponsors are planning to take him to the Winnipeg Folk Festival and Winnipeg's Pride parade next week. Human rights activists Chris Vogel and Richard North are leading the June 3 parade, which starts at the legislature.

"I want to try it," said Hamed, who can't fathom gay men talking about their rights on the doorstep of a government building, then celebrating their sexual orientation with a parade.

Things are going swimmingly for Hamed, though he's having trouble finding a job. Yet:

[Hamed's sponsors, Horst Backe and Mark Rabnett] say there are tens of thousands of people such as Hamed in countries where they're persecuted for their sexual orientation. Rabnett cited one estimate that Iran has executed 4,000 people over the past 20 years for being gay.

The sponsors said they'd like to see more people contact the Rainbow Resource Centre in Winnipeg to form a Group of Five and help an LGBT refugee.