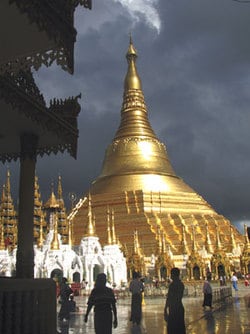 LGBT people in Myanmar and their allies held a series of events across the country last night to for the first time celebrate gay pride, including a concert and discussion attended by about 400 people in Yangon (also called Rangoon).

Burma is a conservative, mainly Buddhist country where many gay men and women feel they cannot come out.

As such organisers decided against hosting a street parade, which is a traditional feature of gay pride events around the world.

Instead, around 400 people attended an evening of music and talks held in the ballroom of a hotel in Rangoon.
…
"In the past we didn't dare do this. We've been preparing to hold this event for a long time… and today, finally it happened," gay make-up artist Min-Min told the AFP news agency.

The event was timed to coincide with today's International Day Against Homophobia and Transphobia.

Previous Post: « T.I. Does Not Care About Gay Marriage
Next Post: Ben Cohen Celebrates Next Step In Anti-Bullying Campaign: VIDEO »