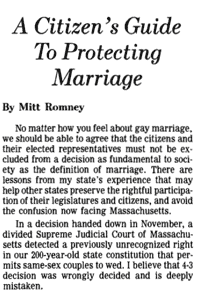 During Mitt Romney’s reign as Governor of Massachusetts, Marc Solomon was head of MassEquality, the lead group fighting for LGBT rights in the Bay State. His position gave him a unique view inside the current GOP presidential candidate’s anti-gay policies, and today at AlterNet, Solomon is using his knowledge to hit back at the Log Cabin Republicans’ pro-Romney endorsement.

I’m sad to say that Romney is someone whose track record is one of turning to LGBT people as an easy point of attack when the going gets tough, in order to burnish his socially conservative credentials, and someone whose personal interactions betray no genuine empathy for gay people, gay families or gay youth, not even when he has taken an oath (and made political promises) to stand up for them.

I won’t speculate on what led the Log Cabin Republicans to put forward their “qualified endorsement,” but I can say it takes no speculation to know what a Romney presidency would portend for gay, lesbian, bisexual and transgender people. The record is clear.

As part of his argument against Romney, Solomon cites Romney’s refusal to grant birth certificates for the children o f legally married same-sex couples and his knee-jerk destruction of a state-based commission meant to protect LGBT youth.

And then there was Romney’s October 2004 Wall Street Journal op-ed equating a state Supreme Court ruling in favor of marriage equality and the 1857 Dred Scott decision that said black slaves were property and therefore not protected by the U.S. Constitution.

From Romney’s op-ed, called “A Citizen’s Guide to Protecting Marriage”:

With the Dred Scott case, decided four years before he took office, President Lincoln faced a judicial decision that he believed was terribly wrong and badly misinterpreted the U.S. Constitution.

Here is what Lincoln said: “If the policy of the government upon vital questions affecting the whole people is to be irrevocably fixed by decisions of the Supreme Court, the instant they are made in ordinary litigation between parties in personal actions the people will have ceased to be their own rulers, having to that extent practically resigned their government into the hands of that eminent tribunal.”

By its decision, the Supreme Judicial Court of Massachusetts circumvented the Legislature and the executive, and assumed to itself the power of legislating. That’s wrong.

The Dred Scott decision was of course over-turned with the ratification of the 14th amendment giving black people citizenship in 1868.

I’ve included a screenshot of the article, via Good As You, AFTER THE JUMP. 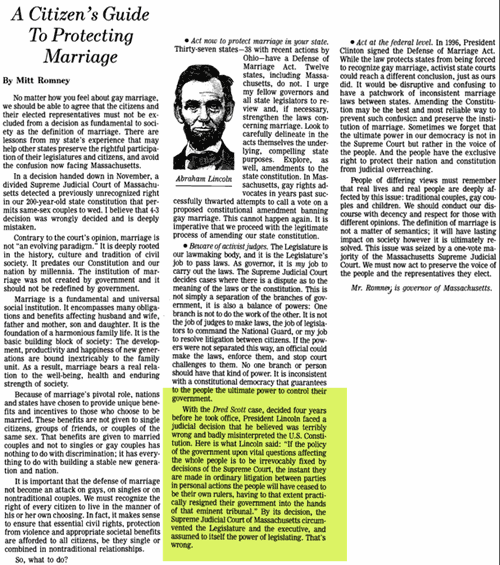