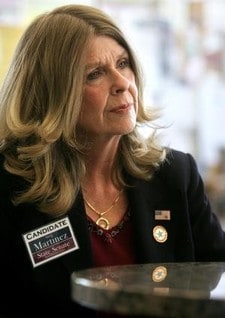 In 2004, when she hosted a public access show called Speak Out!, Sandi Martinez claimed to know people who had been "cured" of gay desires and now realize that their gay "lifestyles" were empty.

"We've seen former homosexuals come out, who've been saved out of the lifestyle, who will tell you it was the love of God, that their lives were sad and empty and meaningless," said Martinez, currently a GOP candidate for the Massachusetts State Senate, during a 2004 Speak Out! episode in which she also slammed Halloween "not something that Christians should be involved in" and called it "a pagan invasion."

Asked about the remarks, Martinez's campaign manager, Tom Firth, accused Lowell Sun reporter Grant Welker of "hav[ing] an agenda" and denied those comments were ever made. "There was no such remarks on the video. To suggest otherwise is a clear distortion and biased reporting."

Martinez, who told Welker "I don't consider what you're doing reporting," claimed she would take time to review the tapes and provide a longer comment but never called him back. Firth meanwhile insisted "[Martinez] doesn't have any anger toward homosexuals or cultists."