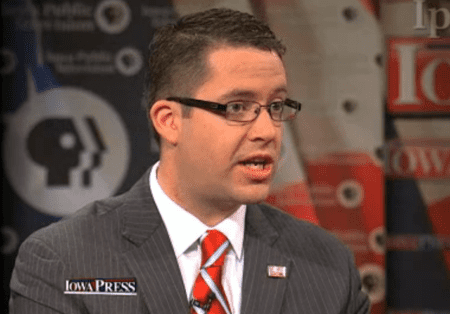 On Friday evening's episode of "Iowa Press," Iowa Republican Party chair A.J. Spiker was asked how he felt about the members of that state's GOP who either no longer want to push for the 2009 marriage equality law to be overturned or who accept same-sex marriages altogether.

"Well, the party wants to be welcoming and we're a big tent and we want to have people of a lot of different views that are part of the party.  But what they also need to understand is that there is a gay marriage party in the state of Iowa and that is the Iowa Democratic Party.  The Republican Party embraces one man, one woman marriage and embraces the right of the people to vote on the definition of marriage."

Spiker continued to say that republicans (who support marriage equality) "are very welcome to be a part of (the party).  But there are areas where we have disagreements as republicans."

An AP article published today reports on the increasing number of republicans in Iowa who have started to support marriage equality:

"I think there's growing support in the Republican ranks for same-gender marriage, particularly in a state where it is the law of the state. There has been no disaster visited on the state because there has been same-sex marriage," said (Jeff) Angelo, the founder of Iowa Republicans for Freedom, which supports gay marriage. "I think there are some that have friends, relatives that are gay that would rather just let this go."

Watch the "Iowa Press" segment, AFTER THE JUMP. The part about marriage equality comes in around 25:35.