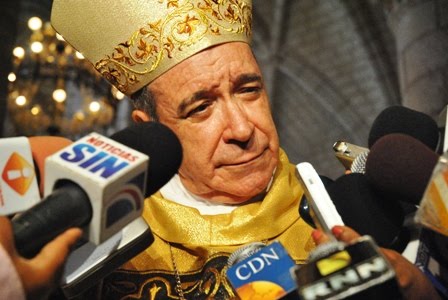 Nicolás de Jesús López Rodríguez, a Catholic Cardinal from the Dominican Republic, is facing a great deal of controversy as of late. Cardinal de Jesus has recently come under fire for using a gay slur, "maricón" (which is generally translated to mean "faggot"), to refer to James "Wally" Brewster, Barack Obama's gay nominee for U.S. ambassador to the Caribbean nation.

Now, the Cardinal could potentially be facing even greater trouble, thanks to accusations of pedophilia taking place in his diocese, as well as evidence of a potential cover up.

Dominican Today has reported that the "Santiago Office of the Prosecutor on Wednesday announced it awaits the Immigration Agency to specify whether Catholic priest native of Poland, Wojciech (Alberto) Gil, accused of pedophilia  by several families, left the country with another identity." Gil managed to flee the country after the accusations began to draw attention to the small village of Janico. Two minors from the village have also left the country, although it has not yet been determined whether they did so in the company of the priest.

Cardinal de Jesús López Rodríguez's diocese announced that the priest has been placed on suspension, effective May 30. Although ASKARBENT has noted that said suspension was not reported until July 3. They were also quick to note the suspicious timing of certain events…

"Gosh, Cardinal Nicolás de Jesús López Rodríguez! Got any ideas about how, as public outrage mushroomed, your priest could have left the country so stealthily, perhaps under an assumed name and maybe even with two embarrassingly talkative minors? Have you thought about asking around — maybe one of your other padres knows something! Maybe you do, but it slipped your mind… We're guessing that the civil authorities would be all ears should you decide to favor them with your distinguished input. Don't be shy, now; we know you can run your ecclesiastical mouth when you want to!"