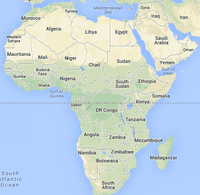 While the notion of expanding LGBT rights leading to potentially negative side effects seems like something pulled exclusively from right wing talking points, a global equal rights campaign group has warned that marriage equality advances in countries like the US, UK, and France have inadvertently led to a 'perverse' worsening of LGBT freedoms in developing countries.

Alistair Stewart, the assistant director of the Kaleidoscope Trust (a UK based charity run by House of Commons Speaker John Bercow) says that working to uphold LGBT rights internationally has grown more difficult as 'our opponents are increasingly moving their resources (and their rhetoric and their hate) to more fertile grounds in developing countries.'

The achievement of equal marriage, parenting and adoption rights and full legal protection can actually impede the struggles in other parts of the world where the battles for LGBT people are about the most fundamental of human rights. 76 countries continue to criminalize 'homosexual conduct', punishable with prison sentences and hard labour. In five countries the death penalty still applies.

Because they are losing ground in the West, our opponents are increasingly moving their resources (and their rhetoric and their hate) to more fertile grounds in developing countries. American Evangelical Churches are abandoning the fight against equality at home, in favour of supporting homophobic laws abroad. Why fight a losing battle against social liberalism in America or Europe, where you are increasingly ignored and ridiculed, when in Uganda, Belize or Nigeria you are welcomed with open arms. In this perverse way the successes of the LGBT movement in the North, and in particular in the United States, have acted to worsen conditions in the South.

As the champagne corks are popped in London and Paris, and we notch up yet more victories for LGBT people in the West, countless setbacks, reversals and outrages occur elsewhere. The Ugandan parliament continues to flirt with introducing the death penalty and imprisoning parents for not turning in their own gay children to the authorities. This week in Cameroon a prominent gay activist was tortured and beaten to death.

And in Russia, President Putin signed a law that bans the so-called 'propaganda of nontraditional sexual relations,' with Ukraine, Lithuania, Belarus and Hungary attempting to implement similar restrictions.

Stewart goes on to say that LGBT persons and allies should remember that "in many places, there is far more at stake than embossed invitations or a gift register."

Indeed, as we celebrate the successes at home, we should never forget that the struggle for equality and basic human rights continues elsewhere.