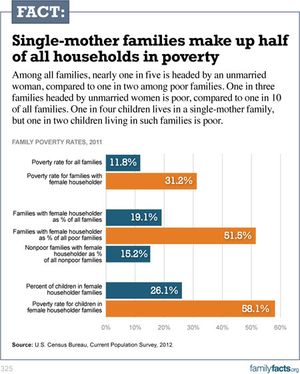 It's no secret that the National Organization for Marriage is dissatisfied with the Supreme Court's recent decisions that did away with Prop 8 and Section 3 of DOMA. After plenty of ranting and raving, the organization has now resorted to some of their older tactics, which include distorting facts and figures. This time around, NOM and The Heritage Foundation are trying to present pseudo-scientific data linking marriage equality with single motherhood, children in poverty, and the claim that men will start to leave their wives if they are allowed to marry other men.

The data in question comes via a chart publicized by the two groups, comparing rates of poverty of single-mother households to that of two-parent households. Not surprisingly, when compared side-by-side, single-mother households ranked significantly higher. While this may not come as a shock to very many, subsequent arguments made by Heritage's Ryan T. Anderson just might:

In other words, "redefining marriage" would create more of these single-mother households, since husbands will no longer feel obligated to stay with their wives after they have children. This would then lead to increased levels of poverty, much like the ones illustrated in the chart. Alvin McEwen was good enough to point out that “the Heritage Foundation offers no proof that marriage equality leads to single-mother families.” Furthermore, ThinkProgress also observes that…

"The study is based on census data and presents no comparable information about the experience of children in same-sex families. This follows a long trend of conservative groups citing studies about “fatherless” children — those being raised by single mothers — and trying to attribute those results to families headed by lesbian couples." 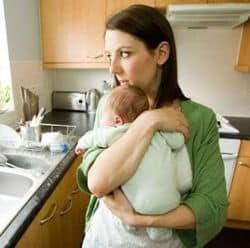 Raw Story presented another interesting counter-argument, claiming that growing acceptance of LGBT people and their rights actually reduces the number of straight marriages that are torn apart when one spouse chooses to come out.

"It’s homophobia that causes people to get married, have kids, and struggle for years before the pressure of living a lie causes them to come out, divorce their spouse, and live as a gay person."

To substantiate this, they presented data which indicated that there are actually more same-sex couples raising kids in red states and areas with more overt homophobia. They argue "that’s because, despite gay couples adopting or having kids together, most gay parents still got their kids during a closeted period in their life."

Whether you agree with the latter claim or not, there is almost no denying that the former claim made by NOM and Heritage is a stretch at best, and is one that echoes many previous arguments previously made by opponents of marriage equality. Raw Story is not surprised:

"Threatening women with male infidelity or with the fear that men will reject marriage if there’s other options available is a long-standing argument against women’s sexual liberation, so it’s not surprising that the anti-gay arguments are basically an extremely strained attempt to do the same thing."

Previous Post: « For Immigration Purposes, Validity of Same-Sex Marriages Likely to Be Based On Where Couples Were Married
Next Post: LGBT Brazilians Give Pope A Gay Kiss-In: VIDEO »