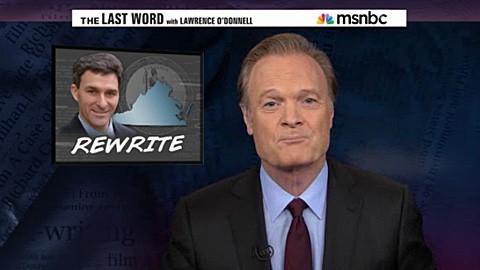 Lawrence O'Donnell tore up Virginia attorney general and gubernatorial candidate Ken Cuccinelli in last night's 'Rewrite' on The Last Word, demanding that the anti-sodomy, anti-oral sex crusader be asked about his own sex life in upcoming debates.

"Virginia is for lovers is bullsh*t," spits O'Donnell.

Watch the jaw-dropping segment, AFTER THE JUMP…

All of this led O’Donnell to a very important conclusion: when Cuccinelli participates in gubernatorial debates, it is completely fair and reasonable to ask him if he has ever violated that law with his wife.

Watch the jaw-dropping segment, AFTER THE JUMP…

And Buzzfeed has more on Cuccinelli's recent anti-sodomy activities:

Cuccinelli has asked the Supreme Court to take his appeal of a case against William Scott MacDonald that he lost at the appeals court in order to allow the state to use its sodomy law to prosecute MacDonald for soliciting a minor — despite the Supreme Court’s 2003 ruling in Lawrence v. Texas that sodomy laws are unconstitutional.

Cuccinelli’s defense has faced criticism due to his continued support — expressed as recently as 2009 — for the criminalization of homosexual sodomy and his opposition to updating the law to eliminate the unconstitutional law while continuing to criminalize the behavior at issue in the MacDonald case.

Rather than addressing those issues, Cuccinelli on Wednesday launched a website attacking his Democratic gubernatorial opponent, Terry McAuliffe, for “Playing Politics Instead of Protecting Our Children.”