Pope Francis was in Rio de Janeiro for the week to celebrate World Youth Day, and on Sunday morning he attracted a huge crowd of three million for Mass. While this Pope is certainly popular in Brazil, he may gain some (hesitant) popularity with the LGBT community now as well.

While taking questions from reporters on the plane back to Rome, Francis spoke about gays and the reported "gay lobby." According to the Wall Street Journal, the Pope's comments about homosexuality came in the context of a question about gay priests. 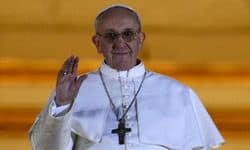 The pontiff broached the delicate question of how he would respond to learning that a cleric in his ranks was gay, though not sexually active. For decades, the Vatican has regarded homosexuality as a "disorder," and Pope Francis' predecessor Pope Benedict XVI formally barred men with what the Vatican deemed "deep-seated" homosexuality from entering the priesthood.

"Who am I to judge a gay person of goodwill who seeks the Lord?" the pontiff said, speaking in Italian. "You can't marginalize these people."

Father James Martin, S.J. who is an admirer of Francis, said that the pontiff's comment about gay people is consistent with the rest of his papacy.

"One of Francis's hallmarks is an emphasis on mercy, which you see in that response. That mercy, of course, comes from Jesus. And we can never have too much of it."

During the interview, the Pope also reported that several allegations of gay trysts with high ranking Vatican officials had been investigated and had no truth to them. He reportedly delivered this news, and his other comments, light-heartedly; according to the AP, "He was funny and candid during a news conference that lasted almost an hour and a half. He didn't dodge a single question…"

The Pope did still refer to homosexuality as a sin, but his reported good will came through.

…when someone sins and confesses, he said, God not only forgives but forgets.

"We don't have the right to not forget," he said.

Could the Catholic Church be taking a progressive turn? Was the Pope simply having a good day? His comments are at least a small step in a positive direction.