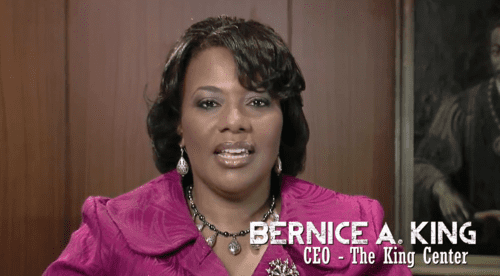 In a new interview with Atlanta Magazine, Bernice King opens up to Rebecca Burns about her life, her fraught relationships with her brothers, and her evolving views on homosexuality.

"For many years, those in the LGBT community have felt betrayed by Bernice King's public aversion toward gay and lesbian people even though her mother was an outspoken advocate and fierce ally for LGBT equality.

"In 2004, Bernice King famously led a march alongside Eddie Long of New Birth Missionary Baptist Church of thousands through the streets of Atlanta to protest same-sex marriage.

"But in January 2012, Bernice King shocked LGBT people by including them in a speech at the annual MLK rally at the King Center as part of the city's annual celebration of her father's birthday. King, though, still seems to carry some kind of grudge against gay people."

"People have labeled me homophobic. If I was homophobic, I wouldn't have friends who are gay and lesbian, so that can't be true. But because I have a certain belief system, I am now the enemy. And I'm not the enemy. I have love for everybody, period. I don't think it's my role and responsibility to take on a platform unless God calls me to do it. That's not something I feel called to do.

"When my mother was living they tried to pit us against each other. I love my mother and she loved me. They couldn't divide true love. We had good conversations concerning this whole issue. But I think we have to be careful in our nation that we don't demonize everyone who doesn't agree with us. …  I value marriage between a man and woman. Spiritually I value that. Psychologically I value that. I know that the absence of my father in my life had its cost."

While King is certainly voicing her support for a community with which she associates now more than ever, that support is limited when it comes to the law. Asked whether she would want to see her gay and lesbian friends marry, King replied: "I wouldn't marry them. But I don't dictate that. That's society's call."

We can only hope that as society continues to make calls in favor of equality among all people, the vital voice of Bernice King will follow.

Previous Post: « Poll: 80% Of Adults In U.S. Struggle With Poverty
Next Post: Pope Francis Delivers Message Of LGBT Tolerance, Asks ‘Who Am I To Judge?’ »