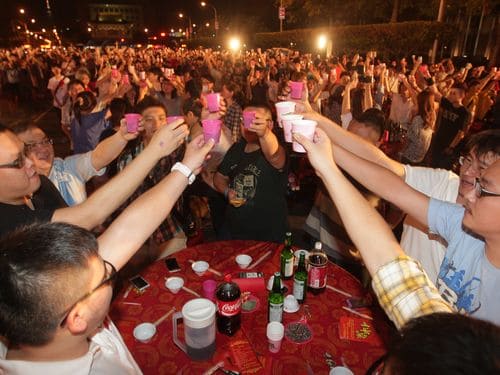 Around 30 same-sex couples in Taipei, Taiwan symbolically tied the knot down the road from the presidential palace Saturday in a symbolic mass "wedding banquet" intended to push the government to recognize same-sex marriages.

A mass wedding that attracted over 1,000 people was held in downtown Taipei on Saturday, amid a push by local civic groups to legalize all forms of civil partnerships, including same-sex marriage, in Taiwan…

The alliance also hoped that the banquet would drive up support for an amendment that would legalize gay marriage, civil partnerships, and the adoption of children by diverse families in Taiwan.

The proposed legislation is set to be submitted to the Legislative Yuan later this month.

Participants sat around tables decorated with red cloths printed with the Chinese character for “wedding”, as they had dinner and watched a video recording of local celebrities showing support as well as live performances in a makeshift banquet venue in a square outside the presidential office in Taipei.

“This looks likes a traditional wedding scene and even if it’s not real, I think a picture is worth a thousand words and I hope we will get more public attention and support for same-sex marriages,” said Richard Chen, a 22-year-old student from Taipei.

According to The China Post, a poll from the United Daily News shows that 55 percent of the population are in favour of same-sex marriage, with 37 percent opposed. Though that same poll also pointed out that 61 percent of respondents would not accept their children if they were gay.

"Taiwan is considered one of the more liberal countries in Asia in terms of homosexual issues and hosts one of the largest gay pride parades in Asia each year," according to The China Post.