I've spent a lot of time fawning over Jessica Lange's Fiona (well, at least when she's not being all mopey). However, if there's one takeaway from last night's action-packed mid-season finale, it's that Frances Conroy can teach a master class in completely owning a scene. Despite the episode's sizable body count, it's Myrtle's twisted dinner party that'll have folks talking. Not only because it was deliciously gruesome, but because Conroy commanded every moment, bouncing from giddy to vicious to cool to completely unhinged. The Coven will not be the same.

That's only one of last night's many, many big developments. As we head into a brief hiatus (new episodes resume Jan. 8), find out the state of the Coven before this season's final four episodes, AFTER THE JUMP …

Let's start with the aforementioned Myrtle scene. Having seen Cordelia struggle with her blindness, Ms. Snow invites the members of the Council (played by Robin Bartlett and Leslie Jordan) over for a delightful little reunion meal. The old friends hadn't seen each other since … well, since they arranged for Myrtle to be burned at the stake. But no hard feelings, promises Myrtle. Here, have some melon!

As Myrtle bemoans the lost art of the refreshing melon palette cleanser between courses, the Council members begin to stammer and freeze in place. Myrtle leans in close and tells them that's just the poison she's soaked the melon balls in. It's merely turning them into living statues. She's not going to kill them, at least not until after she's served the key lime pie. And definitely not before she throws some epic shade at both of them ("You're weak-willed, boring, and your fashion faux pas give me nightmares!"). Then she takes the melon baller out of the bowl (oh, what? You thought she left that in there because she was old and forgetful?) and scoops out their eyes to donate to Cordelia (Sarah Paulson). How sweet. As for the rest of their bodies? She chops them into little pieces and tosses them in a vat of acid. Goodbye, Council! We'll miss you, Leslie Jordan!

Though Cordelia is no longer blind, she's lost her ability of "second sight" (or psychometry). Still, she can see that Myrtle and Fiona need to put their squabbling aside to face the witch hunters. Sadly, Fiona has less luck convincing Marie Laveau (Angela Bassett) that they need to unite. Laveau — who, as you may recall, hired Cordelia's husband, Hank (Josh Hamilton), to kill the Coven — tells Fiona that witch hunters are not really a concern for her. Since she's already at the salon, Fiona tries to return the box containing Madame LaLaurie's head (Kathy Bates), while LaLaurie's headless torso swats at flies in the background. Initially, Laveau tries to refuse the box (you guys, it's really hard to return a racist undead head without a receipt), but eventually instructs Queenie (Gabourey Sidibe) to take it out back and set it on fire.

Instead, Queenie takes the head upstairs for a little rehabilitation. LaLaurie's head will sit there in front of the TV watching Roots, The Color Purple and B*A*P*S until she learns something about the people she tortured. Unsurprisingly, LaLaurie is initially disinclined to participate. Is there any hope for her character, one of the most vile persons in history, to be redeemed? 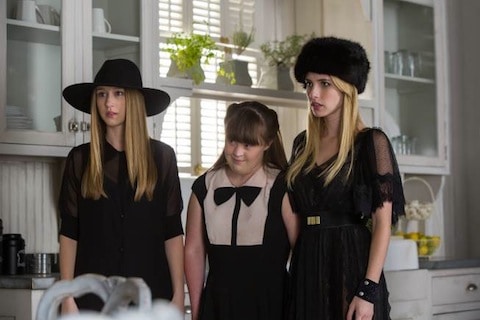 Queenie's former classmates, meanwhile, are hanging out down at the hospital while hunky neighbor Luke (Alexander Dreymon) is recovering from last week's attack. His mother, Joan (Patti LuPone), hasn't let Nan (Jamie Brewer) in to visit yet, but when Madison (Emma Roberts) and Zoe (Taissa Farmiga) show up, they bust into the hospital room. Joan initially doesn't want them there, but Luke is able to communicate via Nan's clairvoyance, and that's enough to convince Joan to keep her around.

It's all fun and games and singing songs she used to sing to Luke when he was young, until Luke reveals that he's actually met the big man upstairs that his mother professes to love so much. Funny story, it appears that His Holiness could not wait to spill the tea about how Luke's mom murdered his father. She stuffed his car full of bees once she discovered him stuffing himself into the mouth of another woman. He went into anaphylactic shock and that was that. Clairvoyance showtime is over! Out, Nan! Once Joan has Luke alone, she resumes her smothering ways, except this time it's literal. Like with a pillow. Goodbye, Luke! We'll miss your abs you!

Hank is having some parental issues of his own. He heads to Atlanta to meet with his father at some massive corporate witch-hunter headquarters. This whole witch-hunting business is a much bigger operation than we've previously seen. Daddy dearest has already selected his right-hand man, and it's not Hank. Maybe that's because back in the '90s Hank blew it on his first witch hunt. His dad rustled some witch wearing Gaga's wig out of the brush, and Lil' Hank just sat there all slack-jawed, unable to pull the trigger. His dad made the save, but burned his hand pretty bad in the process.

So, Hank has a little lingering daddy complex, and he's out to prove himself. That's why he's totally going to kill the whole Coven and all Laveau's voodoo practitioners, but he got a little sidetracked when his wife got blinded by some mystery assailant. About that? Actually, daddy dearest and the Witch Hunters Inc., LLC orchestrated the whole throwing acid in Hank's wife's face thing. Totally cool, right? It's not like Hank's double life has led him to develop any complicated feelings by marrying and living among the people he's supposed to be setting up to be murdered, right?

Hank returns to Miss Robichaux's to reunite with Cordelia, but she's got an icy reception awaiting him. It's like a break-up anthem come to life. First she's all, I should have changed that stupid lock. Then, it's your stuff is in a box waiting for you. But the bottom line is go on now, go. Walk out the door.

As he gathers his sad things in his sad box of sadness, he runs into Fiona and her new guard dog. They exchange some verbal barbs before the dog is distracted by FrankenKyle (Evan Peters). Fiona is unamused by the boy hiding out in the school, and orders him out. Simple FrankenKyle doesn't really understand, plus he's too busy loving up on this adorably doggy. As soon as Fiona turns her back, we hear a sickening snap, implying FrankenKyle went all Of Mice and Men and killed the dog. Goodbye, doggy! We'll miss you, and we think Fiona called you Endora, but we're not sure because you don't have an IMDB page! 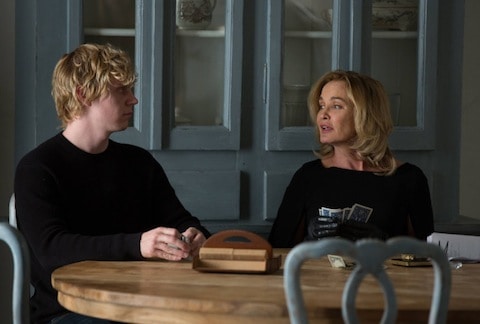 When the girls return from the hospital, FrankenKyle is playing cards with Fiona. The Supreme hasn't completely got him back to his old self, but it's definitely an improvement. And now he can fill the recently vacated position of house guard dog.

They're right to seek protection, and maybe Laveau should have been similarly proactive. Across town, Hank the witch hunter burst into the salon, slaughtering several people and shooting Queenie in the stomach. His rampage unfolds as LaLaurie begins to weep upstairs while watching footage from Civil Rights demonstrations and "Oh, Freedom" plays. It's not Ryan Murphy's most subtle juxtaposition, but, really, Ryan Murphy isn't really known for subtlety.

Hank has Laveau cornered, but, before he can pull the trigger, Queenie drags herself over and uses her voodoo doll powers to kill him by shooting herself in the head. Goodbye, Queenie! We'll miss you, unless you're brought back to life in the next episode!

Having had her people wiped out, Laveau turns to Fiona for that alliance. Back in Atlanta, Hank's father sobs over photos of his son's body. If I may borrow the cliché: This means war.

What did you guys think of the episode? Which death was the most shocking to you? Do you think Queenie will stay dead? Let us know in the comments!