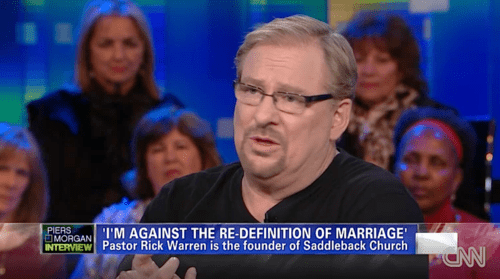 On Piers Morgan's CNN show last night, megachurch pastor Rick Warren was again asked about his thoughts on same-sex marriage. In the ensuing discussion, Warren spoke out against tolerance, saying the concept "has been changed to mean all ideas are equally valid."

Warren also shared his thoughts on the dystopian underpinnings behind 'redefining' marriage:

"I think historically, around the world, the vast majority of people would say marriage means one man and one woman in a commitment. Don't take a term and make it something different. Orwell talked about doublespeak, where words mean the exact opposite of what they used to mean."

Towards the end of the clip, when asked by Morgan if he could envision a time in the future where he and other Christians support full equality for LGBT citizens, Warren shot down the idea with the following answer that led to scattered applause in the audience:

[via The New Civil Rights Movement]