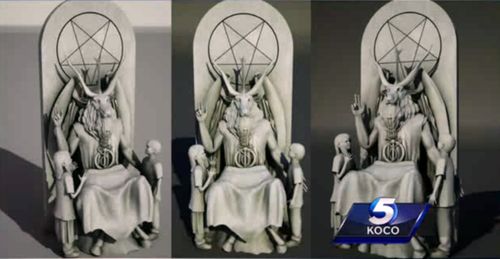 We previously reported on their funding efforts (and their disdain for the Westboro Baptist Church), and now they've delivered. The Satanic Temple, a Satanist group based out of New York, has revealed a design of a 7-foot statue, including a pentagram, a "goat-headed Baphomet," and two children looking on, which would join an already-constructed monument commemorating the Ten Commandments on the lawn of Oklahoma's state capitol.

The Oklahoma legislators approved the privately-funded Ten Commandments statue in 2009, a move that was immediately faced with an ACLU lawsuit. Incidentally, the lawsuit, which hopes to remove the Ten Commandments statue, now stands in the way of approval for the Satanists and other groups: the Oklahoma City Preservation Committee voted to ban construction of new monuments on capitol grounds until a judge rules on the case.

“The statue will serve as a beacon calling for compassion and empathy among all living creatures,” said spokesman Lucian Greaves. “The statue will also have a functional purpose as a chair where people of all ages may sit on the lap of Satan for inspiration and contemplation.”…

"Either way you cut it, this is a First Amendment issue," Greaves said. "Once they open that door, they can't discriminate."…

Greaves assured the Satanists’ monument would be “in good taste and consistent with community standards.”

He also noted that there were a surprising amount of Oklahomans interested in constructing the statue. Still, state legislators have decided that the Satanists may not build their statue alongside the Ten Commandments, though their decision is moot until the ACLU lawsuit is up.

Lucian Greaves summed up the importance of Satanism, and its deserved place alongside the capitol, eloquently:

“Medieval witch-hunts taught us to adopt presumption of innocence, secular law, and a more substantive burden of proof,” he said.

“Today, we are rightly offended by the notion of blasphemy laws and divine fiats. Acknowledging wrongful persecutions has helped shape the legal system that preserves the sovereignty of our skeptics, heretics, and the misunderstood. It has shaped a proud culture of tolerance and free inquiry. This is to be a historical marker commemorating the scapegoats, the marginalized, the demonized minority, and the unjustly outcast.”

What do you think of the Satanist statue?

Previous Post: « Towleroad Guide to the Tube #1490
Next Post: Kevin Hart Explains Why He Doesn’t Do Gay Jokes Anymore »