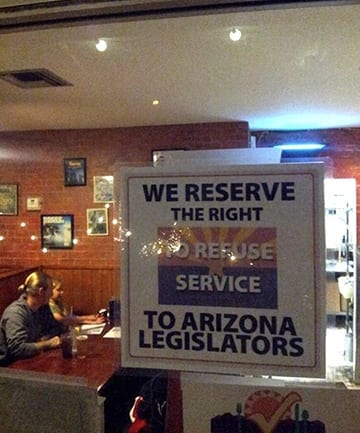 Via Rocco's Little Chicago Pizzeria in Tuscon, comes an inventive way to protest the hateful discrimination bill approved by the House on Thursday.

Owner Anthony Rocco DiGrazia on why he put up the sign: "The response has been overwhelming and almost all positive from across the globe. I just want to serve dinner and own and work in a place I'm proud of. Opening the door to government-sanctioned discrimination, regardless of why, is a huge step in the wrong direction."

Related, The LA Times reports that, should the bill be signed into law by Governor Jan Brewer, many businesses plan to become vocal in their support of the LGBT community.

Some Arizona business owners, still smarting from boycotts launched after the state passed a sweeping anti-illegal-immigration law, are trying to fend off a possible backlash from a new piece of legislation that has the gay community and its supporters in an uproar.

Some businesses have taken to social media, saying that even if the bill does become law, they will welcome LGBT customers.

Brewer has said that she will decide on the bill by February 28.