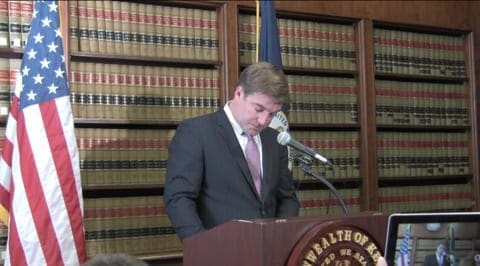 As the saying goes you are allowed no more than just fifteen minutes of fame. There are just too many people to absorb in our brave new world of social media. However, just hit the pause button for a minute. Take just an extra minute or two if you missed it earlier this week to see an endangered species that is available for viewing right now.

What kind? An elected official with real courage. 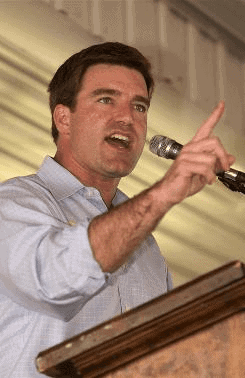 Kentucky Attorney General Conway, in one of the most homophobic states in America, held an astounding press conference refusing to use the powers of his office to defend the state's ban on gay marriage. (Watch the video of the conference here).

If you think that Conway is some old liberal who has nothing to lose you could not be more wrong. The Attorney General is the future of the Democratic Party in Kentucky and the rising star is viewed as very likely to be the next Governor. There is a real possibility in taking this position he could have seriously hurt his future chances in the Bluegrass State.

The latest poll out of Kentucky has 55% of the people opposing gay marriage, one of the highest percentages in the United States.

Conway is a good old boy handsome pol who is Catholic. He has had a presence in Kentucky politics for years. To make him even more Kentuckian, he and his father raised thoroughbred horses and actually had one run in the Kentucky Derby. When he ran for Attorney General the Louisville Courier-Journal found him to be a moderate to conservative Democrat who came out against marriage equality.

Said Conway  in an interview this week with TPM:

"Conway, who opposed same-sex marriage during his failed run for the U.S. Senate in 2010, wouldn't pinpoint when he changed his mind to support full marriage equality. He said he came around "over the last few years" after conversations with friends in the gay community, and after thinking about how his two daughters would come to view his decision.

"To discriminate and not allow two people to marry does not have a rational basis under the law, and therefore it cannot withstand scrutiny under the equal protection [clause of the 14th Amendment]," Conway said, arguing that laws against gay marriage are unconstitutional.

Barring a sudden and swift change in statewide public opinion, the decision poses potential dangers for the attorney general, who has served in the role since 2008, and told TPM he intends to run for governor in 2015 once Beshear maxes out his two terms.

"My wife Elizabeth knew what I wanted to do in my heart," he said. "And at one point she pulled me aside and said 'Jack, you stink when you're not authentic.' And at that point I knew it might cost me politically but I needed to … make a decision I could be proud of."

So, those of you who think there aren't people of courage in politics, think again. For one shining moment in Kentucky, a man of real courage and conviction stood up against hatred and discrimination no matter what the political costs.

Take a minute and savor his courage because it just doesn't happen as often as it should in American politics.