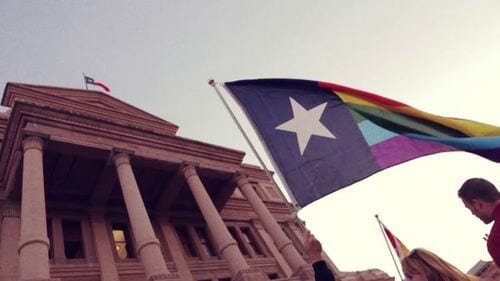 Well this is a first.

An independent poll from Texas Tech Univeristy has found that 48 percent of Texans are in favor of same-sex marriage, while 47 percent oppose it.

“In the past, support for gay marriage in this state was below 40 percent,” said associate professor Mark McKenzie, who oversaw the poll. “Now, we’re closely divided on the issue. … Democrats and Independents strongly support gay marriage, while Republicans are strongly opposed to it.”

A University of Texas/Texas Tribune poll in June 2013 found that 39 percent of Texans supported same-sex marriage — only a slight increase from polls over the previous four years.

However, no poll has been conducted since the U.S. Supreme Court struck down part of the Defense of Marriage Act last year — or since a federal judge in San Antonio struck down the state’s marriage bans in February.

Previous Post: « 20 Signs Your Boyfriend is Gay: VIDEO
Next Post: ‘Brozen’ – A Mash Up of Navy Baseball Players and Disney’s ‘Frozen’ That Will Melt Your Heart: VIDEO »