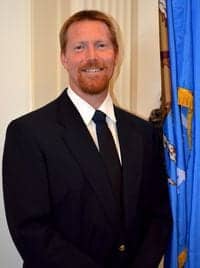 A tea-party candidate for the Oklahoma State House District 91 is in the news today for controversial statements made on social media in support of Old Testament-style punishment for homosexuality.

Scott Esk, who prides himself on being “100% Traditional Family Values,” started throwing out Bible verses on Facebook last July after a friend posted a link to an article about Pope Francis saying “Who am I to judge gay people?”

Esk quotes Leviticus 20:13, the “if a man who lies with a man they shall be put to death” verse, adding that “If men wink at such perversions, God may have no choice than to judge such nations with calamities.”

When asked by the friend to clarify if he really thought gays should be put to death by stoning, Esk responds:

“I think we would be totally in the right to do it. That goes against some parts of libertarianism, I realize, and I’m largely libertarian, but ignoring things that are worthy of death is very remiss.”

And in a follow-up interview with The Moore Daily yesterday, Esk made it clear his views haven’t changed. You can listen to that interview, HERE.

Previous Post: « Alaska Thunderf*ck’s Music Video For ‘Your Makeup Is Terrible’ Is A Feast For The Eyes: WATCH
Next Post: Malfunctioning Elevator In Chile Rises Thirty Floors In Fifteen Seconds, Injures Passenger: VIDEO »