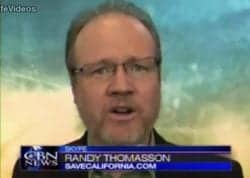 Despite sounding like a setup for that terrible joke of wedding rings being the world's smallest handcuffs, leader of hate group Save California Randy Thomasson took to right-wing talk show host Janet Mefferd's show to compare marriage equality to slavery. Said Thomasson:

It’s tyranny, it’s intolerance, it’s attack, it’s a form of slavery even, that you cannot even have freedom, the freedom of speech, the freedom of religion, and this is leading away from mere opposition to oppression with coming persecution.