Wisconsin Attorney General J.B. Van Hollen (R-pictured) said Thursday that gay couples who have been issued marriage license since U.S. District Judge Barbara Crabb struck down the state’s ban on same-sex marriage last Friday are not married in the eyes of the law and county clerks who issue marriage licenses to these couples could be prosecuted. 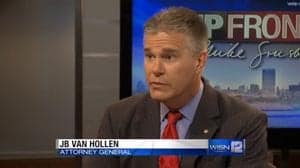 "You do have many people in Wisconsin basically taking the law into their own hands and there can be legal repercussions for that," Van Hollen said. "So, depending on who believes they're married under the law and who doesn't believe they're married under the law may cause them to get themselves in some legal problems that I think are going to take years for them and the courts to work out."

He said he did not believe same-sex couples could be prosecuted but that county clerks risked that happening.

"That's going to be up to district attorneys, not me," he said. "There are penalties within our marriage code, within our statutes, and hopefully they're acting with full awareness of what's contained therein."

Dane County Clerk Scott McDonell said the possibility of prosecution “doesn’t keep me up at night,” and that Van Hollen needs to "call off the dogs and turn off the fire hoses.”

Van Hollen has appealed the ruling to the 7th Circuit Cort of Appeals and is asking for a stay.