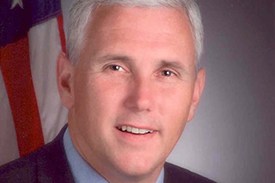 On Tuesday, a federal judge ruled that Indiana must recognize same-sex marriages performed out of state, nullifying a provision of the state's ban on same-sex marriage that forbade gay couples wed elsewhere from being recognized as married in the Hoosier state. The AP reports:

U.S. District Judge Richard Young decided Indiana must recognize the marriage of Michelle and Shannon Bowling of Indianapolis, who were married in Polk County, Iowa, on Jan. 18, 2011. Shannon Bowling is employed by the Indiana Department of Correction, and couple sued to seek state benefits for Michelle Bowling and her children from a previous relationship.

Previous Post: « Bianca Del Rio Gets In Bed With Joan Rivers: VIDEO
Next Post: Hot Cop Of Castro Gets Wet For Charity: VIDEO »