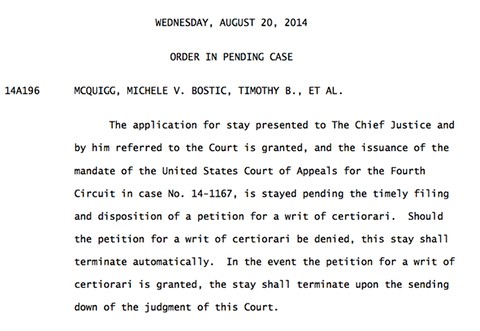 The Supreme Court has decided to stay the U.S. 4th Circuit Court of Appeals' ruling that found Virginia's ban on same-sex marriage to be unconstitutional. As Chris Geidner from BuzzFeed reports, the lower court's ruling is on hold until the Supreme Court decides whether it will review the case or not:

Notably, the court stated that the stay will “terminate automatically” if it does not take and denies certiorari in the case — which is the process by which the court formally takes cases. If it grants certiorari, then its stay ends when it “send[s] down … the judgment of this Court.”

Same-sex marriage was scheduled to become legal in Virginia on Thursday had the Court not intervened.

USA Today reports that in its coming term, the Court will have a number of same-sex marriage cases to consider:

The justices will get their first crack at the broader issue in late September, when they meet privately to consider petitions that accumulated through the summer. They could grant one or more gay marriage cases for the 2014 term or wait for additional appeals.