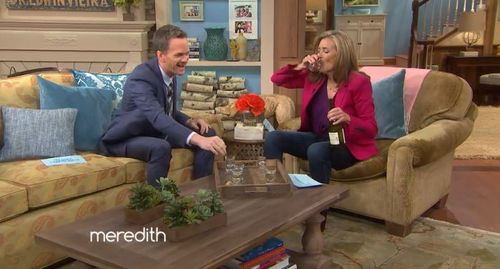 On yesterday’s The Meredith Vieira Show, Neil Patrick Harris stopped by for an interview and a quick game of “Drink or Dish.” The rules were simple enough – the two took turns asking each a series of potentially embarrassing questions and were forced to either answer the question or take a shot (of white wine).

With the game in full swing, Meredith was asked at what age she lost her virginity – and she responded by taking a shot.

When NPH was then asked to share a time when he took advantage of his fame in a situation where he shouldn’t have, he promptly grabbed the entire bottle of wine and took a large swig.

Wonder what that could possibly mean?

Previous Post: « Tom Daley Dressed Up, Stripped Down for 2015: VIDEO
Next Post: A Gay Man’s Coming Out Letter to His Tough Ex-Marine Father and His Dad’s Touching Reaction »