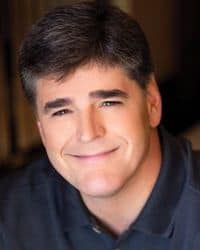 In a discussion about the child abuse allegations surrounding Minnesota Vikings running back Adrian Peterson, Fox News dickweed Sean Hannity brought up his concerns that people trying to dictate how Peterson raises his kids might someday prevent him and other bigots from raising a family in a homophobic environment.

This is my problem with liberals. Here's where my fear goes with all of this – you guys want to tell parents what they can and cannot do. For example, is it going to become illegal if a parent teaches the politically correct view that being gay is not normal?…Some people disagree on the gay lifestyle, because of religious views. If they teach they're kids, is the government going to come in one day and say 'No, that's wrong. That's immoral'?"

Peterson, you'll recall, is "not with" gay marriage. Beating your child with a tree branch on the other hand? That's something he can apparently get behind.

And if you missed Jon Stewart's recent segment discussing Peterson and all the other new NFL "distractions" (which also included a diss directed at Hannity) check it out HERE.