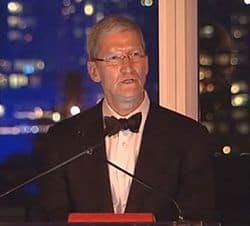 Cook, a native of Robertsdale and Auburn graduate, told fellow members of the Alabama Academy of Honor that the civil rights struggle in the state shaped his life, and said equal access to education and protections for LBGT employees were critical to achieving "equality in truth."

Back in December, Cook received Auburn University's Lifetime Achievement Award and used his speech to call for an end to anti-LGBT discrimination.

Alabama remains one of the 18 states without marriage equality.