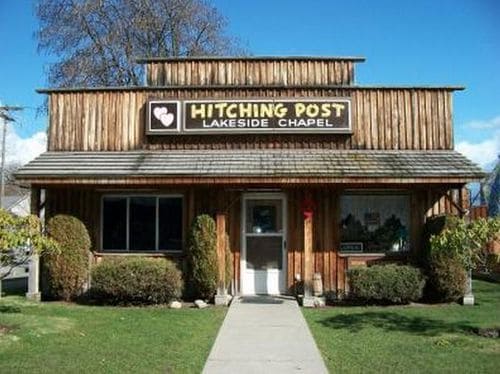 The Coeur d'Alene, Idaho wedding chapel that has become the right-wing poster child for the clash between LGBT non-discrimination ordinances and anti-gay religious beliefs will now be permitted to turn away gay couples seeking marriage licenses, city officials announced today.

Initially, the city said its anti-discrimination law did apply to the Hitching Post, since it is a commercial business. Earlier this week, Coeur d'Alene city attorney Mike Gridley sent a letter to the Knapps’ attorneys at the Alliance Defending Freedom saying the Hitching Post would have to become a not-for-profit to be exempt.

But Gridley said after further review, he determined the ordinance doesn’t specify non-profit or for-profit.

“After we've looked at this some more, we have come to the conclusion they would be exempt from our ordinance because they are a religious corporation,” Gridley explained.

Court filings show the Hitching Post reorganized earlier this month as a “religious corporation.” In the paperwork, the owners describe their deeply held beliefs that marriage should be between one man and one woman.

Coeur d'Alene made the right call. Religious ceremonies by ministers are generally not public accommodations. http://t.co/Iugl6NmSf7

As Jeremy Hooper notes, before the reorganizing the chapel billed itself as a place for "wedding ceremonies of other faiths as well as civil weddings." Leave it to the gays getting equal marriage rights though to throw right-wing religious folks into a full-blown tizzy.