On Laura Ingraham's radio program Friday, the conservative commentator came to the defense of Mike Huckabee, who last week blasted the GOP's largely non-existent response to the SCOTUS marriage decision. Ingraham also shared her (and her viewers') worry that the progress of LGBT equality will somehow criminalize religious beliefs. 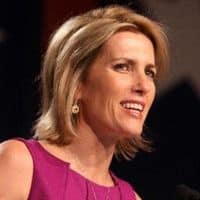 "I think [Huckabee's] just saying what a lot of people believe and you can say that's not right or that's not fair, but they have every right to believe what they believe too…now people are saying 'Laura, how long before my faith becomes a hate crime?' That's a great question and I think Huckabee he's raised this before. If you're a Bible-believing Christian and you're in the military, can you expect to get a promotion? If you're a Bible-believing Christian and have gotten up and spoken spoken about traditional marriage in a high school debate, will that be used against you in getting into a college?"

Listen to the clip, AFTER THE JUMP…