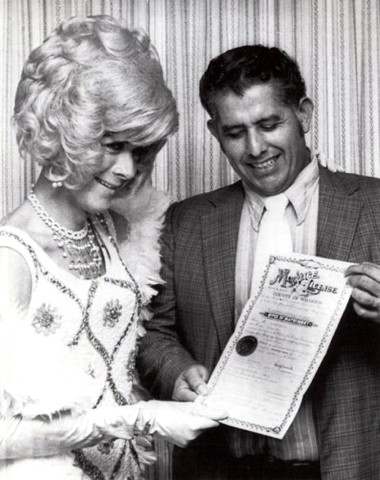 Forty-two years ago, two men obtained a marriage license in Wharton County, Texas — in what was one of the nation's first government-recognized same-sex marriages.

The Houston Chronicle reported Friday on the marriage of Antonio Molina and William "Billie" Ert (above), which took place on Oct. 5, 1972.

Ert, who performed as a drag queen named Mr. Vicki Carr, wore a wig, make-up and a dress to the clerk's office — tricking officials into issuing the couple a license.

Two days later, Molina and Ert held a ceremony in Houston, with the minister who founded Dallas' Metropolitan Community Church officiating. But by then their same-sex marriage made national headlines, and the clerk declined to record the couple's license.

Based on the Baker decision, Molina and Ert ultimately lost a legal fight to have the license recorded, and the next year the Texas Legislature passed the state's first ban on same-sex marriage.

The Houston Chronicle reports that Molina and Ert's case "set back the Texas gay marriage movement 40 years while also helping to inspire a generation of civil rights advocates":

Much of the general public's discomfort with the idea was directly attributable to the movement's early characters, said State University of New York-Buffalo Law Professor Michael Boucai.

"In the Texas case, you have a drag queen. That's not how gay marriage advocates like to represent their current constituency," said Boucai. In Kentucky, one half of a lesbian couple who sued for marriage operated a questionable massage service. Two men in Washington State did not actually believe in the institution of marriage, but still thought they should be able to partake. "They're just not convenient."

Evan Wolfson, president of Freedom to Marry, told the Chronicle:

"These early marriage cases really were reflective of the fact that gay people have always wanted it. But they also remind us it's not just about filing the case in court. You also have to make the case in the court of public opinion."

But Melissa Murray, a law professor at UC-Berkeley, said:

"What these cases did was to bring gay couples, loving couples to the forefront, out of the closet and out of the shadows. I don't think you could have a contemporary marriage movement without them."

After losing their legal fight, Molina and Ert eventually split up. Ert attempted suicide but survived. However, the Chronicle was unable to determine whether he's still alive. Molina died in 1991.

Forty-two years after Ert and Molina obtained a marriage license, Texas same-sex couples eagerly await a federal district judge's decision on a motion that could allow it to happen again.

Read the Houston Chronicle story about Ert and Molina here.